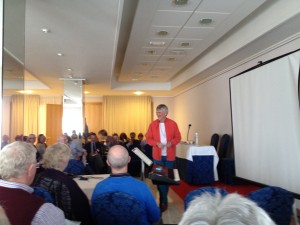 The Rev. John Bell was the keynote speaker for the Gibraltar Archdeaconry synod which was held at the beginning of February. John is a well-known member of the Iona community, a writer, broadcaster, musician, and ordained minister in the Presbyterian Church of Scotland. He took as his theme, “Music in forwarding the Gospel,” and reviewed the way in which our music, our theology and our ministry are inextricably linked. He is a very entertaining speaker, adept at wrapping a serious point in humour and in telling plain truth when required.

Music is a vital part not only of church worship, but of congregational life in general, and a primary factor in the identity and perception of each community of faith. This, in fact, is something that applies well beyond the boundaries of churches. “What we sing is what we end up believing.” John gave examples of music that is, in essence political, ranging from “Rule Britannia,” deemed to rally support for the British Empire, to polemic songs for and against slavery in the USA, to wartime songs (such as, “Yes, we have no bananas,” making light of shortages), to the rallying songs of the 1960s, such as “We shall overcome.”

What we call hymns are, de facto, the folk songs of the church. They are the material that will shape people’s theology more than what we preach. When the best sermon is forgotten, “Jesus loves me,” or “Here I am Lord,” will be remembered. As a result, we learn much of our theology from what we sing, often subliminally, as we sing without really listening to the words, which nevertheless enter our consciousness.

John gave a very witty set of examples focusing on Christmas. Christmas hymns tell us that there was a donkey, when the Bible does not mention this; that it was snowing, when in fact it is less likely to snow in Palestine than it is in Menorca; that there were animals all around (also not mentioned in the Bible) when any decent mother, or midwife, would have had a cow (as it were) to place a newborn child in close proximity to farm animals; that it was silent, when there was a census taking place, it must have been crowded!

Almost all of the hymns about Jesus tell us that he was born and that he died through crucifixion, with hardly anything about his ministry and teaching. This tends to give us an emaciated understanding of Jesus. We inherit a popular Christology that he is nice and he is quiet, leading to the belief that Jesus was never angry (gentle Jesus, meek and mild). But what about the occasion when he told the Pharisees that they were a brood of vipers, amongst others?

What John Bell articulated was something that persists as a problem in our churches. We are drawn to music and hymns that are familiar, and yet if we pause to consider the words that we sing, we might begin to wonder what sort of church it is to which we belong. I can’t begin to count the number of times that I’ve participated in singing a hymn, and thought, “There’s no way that I would preach these words!” In fact, there have been times when I’ve wanted to stop the hymn and issue a disclaimer.

John Bell’s solution to this is not to use new music for the sake of it. He is blunt in describing the worst excesses of some contemporary religious music, which he warned can be “Commercial rubbish,” often with a “Narrow, imperialist theology.” Equally, music that is intended to be the focus of a performance rather than congregational participation run counter to the intentional trend in our worship to make it more participatory, so that what we call liturgy can truly be “work of the people,” which is what the word means, rather than the performance of a few for the amusement of a congregational audience.

Instead, we can take advantage of tunes that we know, yet with words that reflect a theology that is more in keeping with that of our church, and that can be heard, understood, and resonate with the experiences and expectations of people who come to our churches to develop their relationship with God and Christian community in a modern world.

Songs of praise should not be dirges, but there are songs of lament that have been part of worship for millennia. For example, something like 70 of the psalms fall into this category. Did these psalms depress Jesus, or did he see within them a representation of the human condition? What we sing should lead us to ask the question: Who do I know that is feeling like this at the moment? Who may want to say, or have said, something like this? We have a tendency to steer clear of those with depression, yet the biblical experience of Jesus as human being included its own moments of sadness, disillusion and poignancy. Why, then, should these not have a place in our musical repertoire?

What we sing tends to be non-controversial, but this is not true everywhere. John related his experience of hearing and being drawn to, Latin American Christian songs, and translating into English, only to feel that the words sounded a bit too Marxist for the Scottish church, and setting them aside. A few years later, while reading Psalm 94, the words sounded vaguely familiar, and he realized that they were the basis for the songs he had earlier set aside. Psalm 94 was almost certainly said or sung by Jesus!

We can draw upon a broad range of music that comes from heritages other than western European. John Bell recalled that over a century ago, the 1910 World Missionary Conference was addressed by John Mott, known as the father of the World Council of Churches, who told those gathered that they would only experience a larger version of God, or Christ, if they were open to the experience of people who did not speak English and did not come from Europe. It was true then, and it is just as true now, yet the missiology of colonial hymns has lingered long beyond the vision that already existed in 1910.

So we might sing hymns with words that are new to some of us. Why? Because while familiarity with tunes and words gives us a sense of security and comfort, John suggests that familiarity breeds, if not contempt, at the very least a lack of attention to what is being said or sung that borders on disrespect.

It’s a bit like the question that I am occasionally asked: “What’s wrong with the King James Bible.” Well, apart from the fact that there really isn’t a “King James Bible,” for which see such interesting analyses of the way that the Authorised Version of the Bible was prepared as God’s Secretaries, there is quite a list. The translators of the original Authorised Version had less complete texts than have emerged during the last 400 years; language has evolved and changed, so that meaning has shifted; biblical scholarship is not a complete waste of time, and has caused us to understand the meaning in a broader, if not different way; and the cultural and social setting is not the same, and this needs to be acknowledged. There is nothing wrong with reading the Authorised Version of the Bible to appreciate the merits of Jacobean or Elizabethan prose. But for the text to be accessible to more people, to be read and understood, requires allowance for human development and evolution.

So it is with the words and music that we sing. The English hymnal has produced some quite beautiful music over the centuries. But as John Bell points out, there is a lot of other beautiful music that can engage, as well as draw out the meaning of words that adhere to the message of the Gospel and Christian tradition. And there are words that can be sung to tunes that are recognizable and easily sung by congregations. All of this can make music an integral part of encountering and being transformed by Christian scripture and mission in our worship, leading us to a deeper relationship with God.