Santa Margarita was born in Antioch in Syria towards the end of the third century, and was a Christian from childhood.  She was brought up by a pious nurse on stories of valiant martyrs and longed to be like them.  Her father, however, was a priest of the pagan gods, and hated his daughter for her adherence to the Christian faith.  When Margarita reached puberty, she “caught the eye” of the tyrannical ruler of Antioch, whose name was Olibrio.  Margarita’s stubborn refusal to return his love had the eventual effect of making Olibrio persecute her.  With her father’s consent, Olibrio subjected Margarita to appalling tortures, throughout all of which the young girl held fast to her faith and was supported by the voice of God.  Her steadfastness led to many onlookers being converted to Christianity. 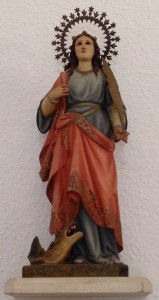 Eventually Olibrio tired of his fruitless efforts to make Margarita plea for mercy.  He had her beheaded, during which the earth shook with a violent earthquake.  The date of her martyrdom is uncertain, but a year often mentioned is 304.

The feast of Santa Margarita is celebrated on July 20th.

The statue of our patron saint, which stands on the wall above the altar, shows a dragon curled about her feet.  It is believed that the devil unsuccessfully confronted Margarita in the guise of a dragon while she prayed to Christ during her torture and imprisonment.

More on Margarita of Antioch may be found on Wikipedia.