By AnglicanChurch on 2017/03/20 in Santa Margarita, Seasons, Themes 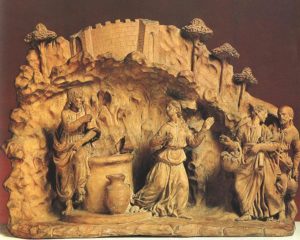 If there had been tabloid newspapers in Jesus’ time, they would have been all over his encounter with a single, Samaritan woman in the heat of a dry day.  They would have, if you will pardon the expression, crucified him with sensationalist headlines along the lines of, “Self-proclaimed messiah caught drinking with foreign divorcée.”

It is an example of how and why he managed to frustrate and even enrage the leadership of his Jewish faith.  She was a Samaritan, a woman, ostracized by her own people, with multiple marriages.  No respectable Jewish man, never mind a rabbi, should have been alone with her.

But Jesus seems not to have been particularly concerned about tabloid mentality, or its first century Palestinian equivalent.  He was thirsty, he saw in the woman’s situation enough to discern her nature, and he asked her for a drink – seemingly innocuous, but actually a very simple, small act of respect – one that broke down a barrier.  In turn, despite her audacious, direct, even cheeky manner, she was able to discern in Jesus someone who could satisfy a thirst that she did not even know that she had before.

This is in fact one of Jesus’ acts of healing, because he restored respect to the woman, he restored her at least in part to her community, and he instigated reconciliation between Jew and Samaritan – at least the Samaritans in this community, who were led to a Jewish rabbi and found acceptance and a message for them, regardless of differences about where and how to worship.

True worship takes place in a relationship with the person of Christ, which spills over into our relationships with one another, because when Jesus satisfies thirst, his spiritual water is offered in overflowing amounts.

Jesus continually shows us alternative ways to live together; he shows us new ways of learning about and from one another, and shows that we need one another: water from the well in exchange for the water of life.

Jesus shows that it is possible to reach out – even from a point of inferiority – and initiate a healing process – even in seemingly simple and inconsequential acts of reaching out to one another.

Jesus shows that we should seek to satisfy our thirst in the primary goals of ministry: in teaching, in healing, in reaching out to one another – which includes people who are rather off the social scale, such as a Samaritan woman with five failed marriages.

And in this Jesus shows us, through his words and actions, that tabloid newspaper mentality – which likes to denigrate or dehumanise those who are different or disadvantaged – is just about as far as could be from his way of treating people and his way of encouraging us to treat one another.

We have many forms of thirst in our lives: attention, recognition, acceptance, a place of our own, peace, truth, perhaps just love.  Jesus shows that the only true satisfaction for such thirst is to be found in God, and that it may be offered through the most unlikely, unexpected and improbable sources.

View all posts by AnglicanChurch →
Theme for the Week – second Sunday of Lent 2017
The Five Marks of Mission: 5