By AnglicanChurch on 2017/03/12 in Santa Margarita, Seasons, Themes

In the midst of a lot of dark news in the past week, something caught my eye.  Apparently darkness makes sheep’s horns grow.  It’s why their horns grow longer in the winter, when there is more darkness.  It’s all connected to melatonin, a hormone which is released at night and affects a number of things including the growth of sheep’s coats, their horns and their fertility.

We tend to think of darkness as unpleasant and sinister, often associated with evil.  However, without the contrast of darkness we are less able to appreciate the value of light.  And darkness is not without its positive aspects.  Seeds germinate in the dark.  We are conceived and grow embryonically in the darkness of the womb.

Metaphorically, darkness has its place to play in the story of faith.  Abram was willing to venture from the light of his familiar home surroundings to follow God’s call into the shadowy, dark realm of unfamiliar territory.  Ultimately Abram found his faithfulness rewarded with a journey that became filled with the light of God’s blessing – but not without its shadowy episodes. 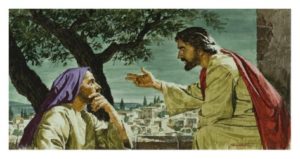 Darkness is the setting for the encounter between Jesus and Nicodemus, who arrived in darkness and seems to have still been in the dark, in more ways than one, when he left – or was the darkness within him?  The conversation between the two is ambiguous, depending upon the tone of voice that we hear, which is not evident from the written text.  It could be critical, or humorous, or pensive.  The last leaves Jesus pondering upon the magnitude of his task – even a teacher of Israel seems to be in the dark about his faith and the part Jesus has to play in it.

Nevertheless, Nicodemus did find the light – later he defended Jesus, and then participated in the burial of his body – an act of faith and solidarity.  But he had to be willing to enter the darkness to find the light.  And it took time.  Darkness can be a place where our appreciation for the light develops and grows.

More recently, Mother Teresa reportedly faced a dark night of the soul, often feeling isolated from God.  She once said: “The greatest disease in the West today is not TB or leprosy; it is being unloved, unwanted and uncared for.”  Yet out of her darkness she found the light of inspiration to shine the light of her compassionate ministry into the dark areas of Calcutta.

The readings offer us God’s terms for the journey of life and light – better than taking it on our own terms and by our own powers.  The psalmist sings of the constant companionship of God – and actually speaks of God in terms of shade as shelter.  Sometimes the full glare of enlightenment is too much for us.  Echoing the story of Abraham, Paul points to faith in God as the path towards the light of grace in our lives.  John’s whole gospel is the story of Jesus bringing light into darkness.  An encounter in darkness guided Nicodemus into the divine mystery that lies beyond understanding, answers, or explanations.  It can guide us, too.

We need not be afraid of darkness in our lives, at least not with God beside us; indeed, we have to be willing to spend time in darkness in order to find the true light.

Darkness has its value.  It is not just Sheep’s horns and seeds that grow in the darkness – faith can germinate and grow there, too.