By AnglicanChurch on 2017/04/25 in Santa Margarita, Seasons, Themes 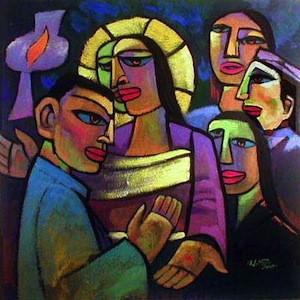 The encounter between Jesus and Thomas is so important that we read it every year after Easter – not just one in three.  It is for us, who “have not seen and yet have come to believe;” and who need a representative in the doubting department.

However, to remember Thomas only as “doubting” does him a disservice – he showed loyalty and faith to Jesus on other occasions (see for example John 11 and John 14).  And his absence when Jesus came to the locked upper room tells us that he was willing to go out when the others were too fearful.

What else does that tell us?  That the disciples were reluctant to believe Mary Magdalene’s account of the risen Christ?  Or that even a risen Christ was not good enough to make them feel secure?

It is as if they said: “Thanks, Jesus, you’ve been great for the past three years, you’ve done some miraculous things, but we saw what they did to you, and regardless of whether you’re alive or not, we’re not all that keen to end up on crosses.”

And, in a way, they were right, weren’t they?  Few of those ten or eleven died peacefully in their own beds at an advanced age.

In that case, whose doubt is greater?  Thomas, who doesn’t want to have his hopes shattered a second time?  Or those who had been told about the risen Jesus – and then encountered him – but still kept themselves locked up for safety?

It is as if we say: “I’m sorry Jesus, you’ve been great, you’ve done some miraculous things, you were even resurrected, but we don’t believe that you can keep us safe, so we need to find bigger doors and bigger locks to keep us safe, tighter boarders, and while we’re at it, hoard more of our own prosperity to be sure that we’re comfortable, locked away in safety.”

But the answer of Jesus is: “You seek safety in this life.  I offer you everlasting life.”

There is nothing wrong with doubt and question; they help to define our faith, and as Leonard Cohen wrote: “There is a crack in everything; that’s how the light gets in.”  Instead of covering the cracks in our faith, it is better to let the light shine through them.

On the day when St George is commemorated, it might be better to remember his allegiance to the kingdom of Christ, rather than to any one of the states who claim him as patron.  We, whether English, Catalan, Georgian (to name but a few), share George – a reminder, perhaps, of the efforts of Jesus to unite his diverse people in unity, not in nationalism (which cost him his life, even if God restored it).  No earthly kingdom deserves allegiance (let alone worship) in preference to the kingdom of Jesus.

Meanwhile, can we really allow ourselves to be locked away for perceived security?  Even the doubting disciples eventually ventured out to find themselves transformed – better to be an anxious apostle, out doing the work of Christ.  And so it ought to be for us, acknowledging our questions, letting God’s light shine through the cracks of our faith, equipping us for our role.