By AnglicanChurch on 2017/04/17 in Santa Margarita, Seasons, Themes 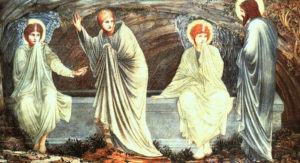 ‘Cognitive dissonance’ is a term in psychology used to describe the mental stress, or discomfort, experienced by a person who simultaneously holds two or more contradictory beliefs, ideas, or values.  Believing someone to be dead, having seen their death, and seeing them alive again, could lead to dissonance.

After two thousand years of celebrating resurrection we might be forgiven for underestimating the utter confusion and disbelief of disciples confronted with the risen Christ.  Not only that, but the verification systems for dealing with the “fake news” of their day had strict procedures: the testimony of two men was required – not women.  Yet Jesus chose to reveal his resurrected self to one (or more, depending upon the gospel in question) women.

In John’s gospel, Mary Magdalene, having sought the requisite two men to verify her experience of the empty tomb, sees them wandering off in confusion and then descends into weeping – the disappearing body being last straw in the trauma of loss and grief, of seeing the brutal treatment and execution of the Christ of her healing, belief, friendship and hope.  Then a gardener comes along and asks what is wrong.

The gospel says that she was mistaken, but perhaps she was inadvertently correct.  There are three important gardens in the Bible: Gethsemane, where Jesus prayed before his arrest; the one where Jesus’ body was entombed; and the garden of creation, Eden.  Who was Jesus?  “In the beginning was the Word, and the Word was with God …”  Jesus was – and is – the gardener: God’s gardener of souls.  And, as Mary, utterly overwhelmed, found, very much alive.

The wonderful, exuberant mystery of this is something that we have to approach, like Mary, through the intimacy, abandonment, pain, suffering and death, because the agony sets the ecstasy in stark – and uplifting – contrast, and never should be taken for granted.

While resurrection is something for humanity as a whole, it is very much personal.  Ask anyone who has lost someone they loved – or actually anyone who has experienced deep loss, or some form of death – and then been exposed to the new life that God breathes into us.  It’s very personal.  He’s alive – and so life is stronger than death

This case of cognitive dissonance can either lead to a leap of faith, or a leap of confusion; of hope for the world – including us – or of chaos.  Personally, I’m with the gardener – he has the way to cultivate true life.