Some years ago, while I was a curate in California, I caused something of a stir in an article in the parish newsletter.  I wrote:

There are many signs about that say, “God bless America.”  Well, God has blessed America – with material prosperity, with freedom, with a sense of justice and a system within which to execute it, with intellectual gifts, with creativity and an environment to pursue it.  But has America blessed God, I wonder?

Well, that caused a bit of a stir.  A couple of people complained to the rector.  But he was even more adamant in my defence than I would have been. And, as far as I’m concerned, it remains a valid question – and not just for America.

How many of us fully appreciate the blessings that we have already received?  There used to be a habit, when I worked in Silicon Valley, to be dismissive about someone’s previous achievements (no matter how substantial or impressive) by responding, “Yes, but what has s/he done for us today?”  Often it was simply intended to be funny, but as the saying goes, many a true word is spoken in jest.

There is a serious underlying point, which surfaces when Jesus feeds 5,000.  Actually, he tells his disciples to give the people something to eat.  They don’t believe that they can, but a blessing from Jesus demonstrates that there was enough – with plenty left over.  Jesus asks for the bread and fish to be brought to him – and there lies a challenge.  We do not like to give up what we perceive to be ours, because we are encouraged to believe in an economy of scarcity.  We forget that what we have is only ours because we have been blessed with it, in God’s economy of abundance.  Then we find ourselves in a struggle for something that we already have. 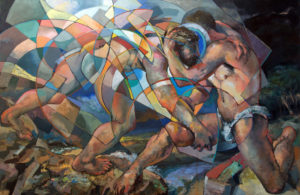 This, of course, is what happened to Jacob.  Fearful and alone, he was confronted by God in the form of an angel, struggled with him through a long, dark night, and then asked for a blessing.  Ironically, Jacob had, of course, already been richly blessed.  Jacob received the blessing, another confirmation of God’s favour, but also received a new name (a reminder of who owned him) and a limp.

The name passed to a people, who inherited this sad trait of feeling obliged to wrestle with God for a blessing already received. So when later, the people of Israel, in the Exodus, are given the blessing of freedom from slavery, and the promise of a new land, they very quickly resort to, “What has God done for us today?”

And we share this characteristic: “What have you done for us today, God?”  God’s response?  The one who said, “You give them something to eat,” already has blessed us with the ability to do so.  This God’s economy of abundance.  Humankind has been richly blessed.  How do we bless God in return?  Whatever we have received by way of blessing can be offered back to God, who will multiply it in ways, “more than we can ask or imagine.”  However, we should pay attention to recognise such blessings.  To overlook them might lead us into a struggle with God for a blessing already received – which will be given – but possibly with an accompanying limp.

View all posts by AnglicanChurch →
Theme for Sunday, 30 July 2017
Finding God in the World Around Us