[Reproduced from the August 2017 issue of Roqueta, Menorca’s English-language magazine.]

“You don’t have to go to church to find God,” I said at a memorial service in Canada several years before moving to Spain.  It was in a retirement home; we were celebrating the life of a lady who found peace in the surrounding countryside, and who had a particular affinity for owls.

Tangentially, I should add that I did not know about the owl connection, but on the morning of the funeral, seeking some inspiration for what to say, I had arisen early, gone for a run, and was surprised to encounter a pair of (endangered) Northern Spotted Owls – never to be seen in the morning, occasionally to be seen at dusk.  You may imagine the uncanny feeling when I walked into the room for the service to find it decorated with pictures of the deceased lady and of the owls she loved.

Anyway, this statement was pounced upon by one of the residents, who promptly became my friend, since I had apparently freed him from guilt about not attending church.  I used to have monthly communion services in the retirement home, but he never attended one of them.  He did talk to me when I visited, and he did commune with nature.  When he died a few years later, he left strict instructions that I was to conduct his funeral.  I like to think that at least I allowed him to express his own form of spirituality and dismantle some of the walls erected in his own mind, or by the expectations of others, between him and his creator.

Well over a year ago, our friend, Teresa, who lives in a small community in a fairly remote part of British Columbia, informed us: “You have to come to Powell River.  We can walk the Sunshine Coast Trail together.”  The Trail is a 180-kilometre back country experience that traverses a wide variety of landscapes, from coastal shorelines, along creeks and lakes, through old growth forests to panoramic mountaintops.  There are no churches along the route (well, it skirts the small town of Powell River, where there are several churches, but that doesn’t really count)!

As I know well from church experience, there is no more effective form of evangelism than the personal invitation.  So in June, we donned our hiking boots and packs and embarked upon a few sections of the Trail.

It would be easy to presume that walking through any part of BC’s rain forest would be largely the same.  Once on the Trail, it doesn’t take a very observant eye to realise that the scenery varies from hill to hill, from lake to lake, from shore to shore. 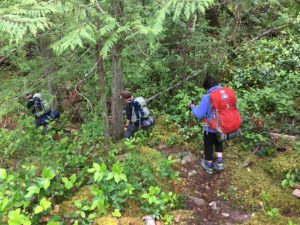 In Roqueta last September, reminiscing about the Camino de Santiago, I mentioned that we learned along the way that, “Everyone makes their own Camino.”  It has to be the same for the Sunshine Coast Trail.  Each one who walks will find their own special places and moments.  For me the idyllic experience of eating lunch in the sunshine on a bluff overlooking one of the lakes is only slightly ahead of the calming beauty of watching the intersection of nature and humanity at a fjord-like bay where the ferry passes every hour.

Walking the Trail has much to teach.  The forest is full of death, with the carcasses of ancient trees, but is also rampant with the glowing green of new life; huge trees fall, and new bushes and saplings emerge from the resulting scars in the landscape.  One of our hosts said that the trees in BC reproduce by falling over.  My mischievous mind immediately thought that some humans do, too.

The walk is not without its challenges.  What are, in their context, modest hills are multiples of Menorca’s Monte Toro in height.  Those strenuous parts offer the opportunity to stretch and test the limits of our capabilities.  So do the privations of moving from one simple cabin to another, sleeping on a mattress pad on a wooden floor, boiling water from streams to drink, taking delight in the relative luxury of a composting toilet as opposed to rather basic and uninviting latrines.  The embracing of wilderness can reach within us to draw out what is most important.

In the context of the Camino de Santiago, I mentioned the discipline of walking at the speed of someone else.  On the Sunshine Coast Trail, I found that following someone whose walking speed was slower than mine meant that I noticed things along the way that I would not otherwise have seen.  There’s a metaphor for life!

Walking through the forest, in all its variety, even on a marked trail, is like taking a journey into a primeval place and time.  “When the cool, dark forest is too silent to be real,” sang Gordon Lightfoot about the time before the railway opened up Canada in his Canadian Railroad Trilogy.  When I moved to British Columbia from California, I remember being on a boat at sea, looking up at the steep, forested mountainsides rising from the water, and muttering a small prayer that I might never take any of it for granted.  When I came to Menorca, with its very different kind of beauty, I offered up a similar request.  Sometimes the beauty of these places does seem almost too much to be real.  Yet they are both, in their different ways, examples of a wonderful creation that we can enjoy and whose care is entrusted to us.  And places in which we might just find ourselves encountering God – with or without unexpected owls.