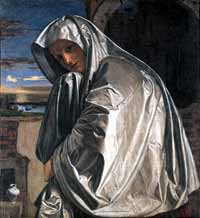 As we celebrate the festival of Mary Magdalene, we face an enigma.  There is much attached to her reputation by tradition which has little, if any, scriptural basis. But she wasn’t a prostitute, probably didn’t anoint Jesus’ feet, wasn’t married to Jesus, and didn’t write the Fourth Gospel – so what do we really know about Mary Magdalene?

Two things stand out: she was identified in a list of women who provided for Jesus and the disciples out of their resources; and she was the first witness to the resurrection – or among the first witnesses (varying by gospel).

Not knowing much about her previous life only serves to strengthen our faith in her as the one given new life in Jesus – twice.  Once through Jesus’ healing touch; once through her experience of the risen Christ.

She is often described as the apostle for the apostles: the one sent to them after the resurrection.  To be an apostle meant first being a disciple: one willing to learn, to be improved, with a spirit of humility.

Those who are most effective as apostles, ones sent to proclaim the good news of Christ, are those who come out of weakness to acknowledge the One who created them.  As we approach the table to receive Holy Communion, we might do well to recall the nineteenth century words of John Hunter: “in your frailty and sin you stand in constant need of Heaven’s mercy and help: come, not to express an opinion, but to seek a Presence and pray for a Spirit.”

In that context, what qualities of Mary Magdalene might we emulate, or at least learn from?  She was willing – no, driven – to persist in staying with Jesus, to learn from him, then in looking for him amongst even the dying and the dead – willing to go where others would not go.  She manifests qualities of persistence, sincerity, enthusiasm, dedication, determination, devotion.

She was not so much a reformed sinner or a woman of ill repute, but rather a woman who was healed by Jesus, almost certainly in conjunction with the point that mental illness, or any other form of “unclean” illness, did not manifest a reason to judge, or to condemn, or to exclude – and did not disqualify her as a witness.  And based upon her witness to the resurrection, we might remember that God chooses witnesses based upon different standards from the world around (those whose word doesn’t count conventionally).

In the enigmatic words of Jesus: “Don’t touch me,” it is not that he is untouchable (a few verses later in John’s gospel, Thomas is invited to place his hands on Jesus’ wounds); rather they suggest that she should not cling to the earthly form of him – because something new and greater is beginning.  She was the first witness to that new beginning, of new life following resurrection.

Mary Magdalene was there at the beginning, there at the end (which was a new beginning), and supportive in between.  She deserves to be venerated as a courageous leader: truly the apostle for the apostles.

View all posts by AnglicanChurch →
Theme for Sunday, 15 July 2018
Readings for August 2018