By AnglicanChurch on 2016/02/06 in Christian Formation, Santa Margarita

On 6 February, the church commemorates the first Christian martyrs in Japan. 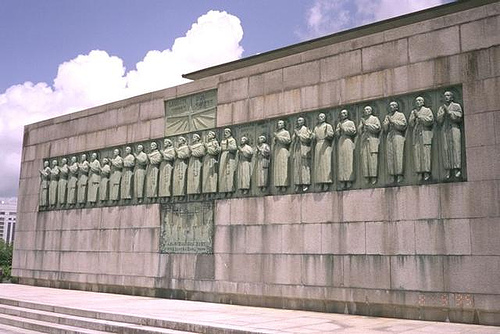 The 26 Martyrs Monument and Museum, Nagasaki

February 5,1997 marks the 400th anniversary of the first Christian martyrs in Japan. The Japanese martyrs became Christians as a result of the witness of Roman Catholic missionaries who first arrived in Japan with the Portugese in 1543. The Jesuit priest Francis Xavier, whose mission work between 1549-1551 from Kyushu to Kyoto, laid the foundation for the future Christian church in Japan. In 1563, Omura Sumitada became the first daimyo baptized by a Jesuit priest. The first church was built in Kyoto in 1576. According to Martin Repp of the NCC Center for the Study of Japanese Religions, “between 1579 and 1582 the early missionary work was revised under Father Alessandro Valignano, one of the few who understood that Christianity had to loose its European flavor in order to become acceptable to the Japanese” (Martin Repp, “Introduction” Japanese Religions, Vol. 19 No. 1&2, Jan. 1994, p.1).

Because of unrest among his subjects attributed to Christians, Shogun Hideyoshi issued in 1587 the first decree banishing the propoagation of the Christian faith. After a century of civil war, he feared unrest that might lead to peasant revolts. He stated that the religions of Shinto and Buddhism were the only religions of Japan. Nevertheless, for ten years Christian missionaries enjoyed toleration in a restricted way. After the arrival of Spanish priests of the Franciscan and Dominican orders in the beginning of the 1590’s, rivalry and quarrel arose among the Christian missionaries. The conflict was also between different European nationals. In 1596 the “San Filipe” incident dealt a serious blow to the Christian mission. The Spanish ship “San Filipe” ran aground and its cargo containing a lot of ammunition was confiscated. The ship’s pilot was said to have told during interrogation that Spanish colonial expansion was normally proceeded by missionaries preparing the way for military conquest. This argument was taken up very quickly by the Japanese rulers.

In 1597 Jesuits and Franciscans were taken prisoner in the capital (the Jesuits were released soon due to their connection with the court) and twenty-six Christians, Japanese and foreigners, were executed in Nagasaki, becoming the first martyrs in Japan. The Rev. Sigfrid Schneider describes an incident from the martyrdom on February 5, 1597,” On the way up the hill a nobleman tempted the youngest boy, Louis Ibaragi, who was only twelve years old to renounce his faith, He would not yield but eagerly asked: ‘Where is my cross?’ When they pointed out the smallest one to him he immediately embraced it and held on to it as a child clings to his toy.” (Sigfried Schneider, Ofm, The 26 Martyrs of Japan, Chuo Press, 1980, p. 16)

In spite of local persecutions, the Roman Catholic mission continued to expand. Finally, in 1614, Shogun Ieyasu issued the edict of persecution and ensured its implementation: churches were destroyed, foreign missionaries were expelled, and Japanese Christians tortured and killed. From this time on Christians went into hiding and were known as Kakure Kirishitan (Hidden Christians). In 1637/38 the “Shimabara Rebellion,” a peasant uprising in Kyushu under Christian leadership, was put down. In reaction to the turmoil caused by this last attempt at survival, the government closed the country to Roman Catholic traders as well as Christian missionaries. The contact with the West was henceforth strictly controlled. As an annual procedure, fumi-e (stepping on a metal image of Christ or Mary) was performed and Japanese had to publically confess that they had nothing to do with Christianity. In spite of the most cruel persecution, some Christians managed to survive and worshipped Christ in secret or under the guise of other religious rituals or tea ceremonies. Persecution of Christians continued until 1854 when Japan was opened by Commodore Perry.

by Jeff Powell, from Koinonia, the Newsletter of the Tokyo Union Church