By AnglicanChurch on 2016/02/05 in Christian Formation, Santa Margarita 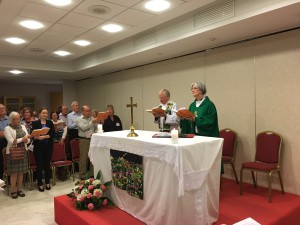 At the closing service of Holy Communion for the Gibraltar Archdeaconry Synod, the Rev. Geoff Johnson, who is the Archdeacon, preached.

The theme for the Synod was ‘Uncomfortably Anglican,’ but as several others before him had noted, being Anglican is not exactly uncomfortable for many of us.  In fact, Geoff was very comfortable being an Anglican, in worship and the way in which a broad spectrum of people are accommodated.  Anglicanism has much offer in a rich heritage of practising faith.

But tensions and stresses have arisen.  Archdeacon Geoff mentioned the current divisions within the Anglican Communion over human sexuality – even, thirty years after the first ordination of women to the priesthood, those who find themselves unable to receive communion from a female priest.  A recent cartoon by Dave Walker caricatured the way in which bystanders are bemused to observe the ways in which Anglicans seem to have tainted the image of Christianity in the eyes of a sceptical world.

In this, we are simply not living up to our calling as followers of Jesus Christ.  Yet this is what ultimately can unite us, despite our differences.  We are called to serve.  We have been given the example of the teaching and life of Jesus who, as one of the readings for the Eucharist, from Philippians, states, was willing to empty himself in order to serve a needy world.  In all that Jesus did, he was willing to offer himself in service to others – and Archdeacon Geoff reminded us of the washing of feet, which was no trivial, sanitised act.

These three, humility, humour and humanity, equip us to go out to serve God, by serving the world – whether we journey confortably or uncomfortably as Anglicans.