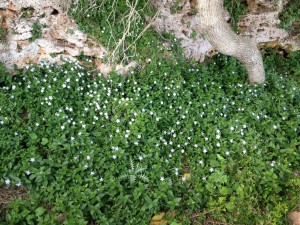 Tears of the Virgin: flowers that only appear during the season of Lent (according to a fairly reliable source).

This article is reproduced from the April issue of Roqueta, Menorca’s English language magazine.

Kate and I continue to make our way through our first year of life in Menorca, and the last few months have been full of discoveries. We have experienced the celebration of familiar things in new and different ways. We have enjoyed our first Christmas here, and our first Epiphany (Los Reyes). Personally, I have been revelling to live in a place that allows the season of Christmas to stretch over its full extent, rather than being destined to end at about noon on Christmas day. We sang Christmas carols in the plazas of Es Castell and Ciutadella, together with members of the New Life Church. Traditional services of lessons and carols were also held in Ciutadella and at Santa Margarita in Es Castell.
Last Christmas, for the first time, the congregation of Santa Margarita collected food and donations to prepare Christmas bags for 30 local families in need. These were distributed in conjunction with the Social Services department of Es Castell, which nominated the recipients. We plan to repeat the process for Easter.
Now we find ourselves walking through the season of Lent towards Easter as spring unfolds new life on the island. Lent is a season that is a kind of pilgrimage, a spiritual journey of exploration.
On a Monday in February, a month whose reputation for ferocity was somewhat undermined by its performance this year, we walked from Binimel.là to Cala Pregonda. Along the way, I spent some time watching a hermit crab move slowly but steadily around a small tide pool. It occurred to me that this tiny creature’s whole life was more than likely to be spent within the confines of its miniature domicile, without the quest for exploration and discovery that characterises much of humanity as a whole, if not all of its individuals. Perhaps this is what sets us apart from other creatures: an intentional desire, sparked by an intrinsic intellectual curiosity, to learn more about the environment that we occupy, and the broader aspects of the universe around us. I remember watching slugs cross the riverside and forest paths in British Columbia, and wondering what motivated them to move from one perfectly acceptable habitat to another, and hoping that what drives human beings to make similar moves is more intellectually driven!
We are creatures of exploration, and the movement of human beings around the world has been a collective journey of discovery. Along the way, this has caused us trouble, as communal rivalries have caused our journeys to collide, resulting in much conflict. Wars and crusades are not glowing examples of accomplishment. The human characteristic of curiosity and inventiveness has, as its darker side, a desire to possess and to own what we encounter, whether it be property, land or people.
So we progress through the season of Lent, in anticipation of the new life that emerges at Easter. Lent begins with Ash Wednesday, reminding us of our mortality, which should engender a spirit of humility within us. The season is framed by recollection of Jesus’ time in the wilderness, during which he was subjected to basic temptations that broadly speaking are about material nourishment at the expense of spiritual nourishment, about seeking attention, and about imposing control and exploiting power. In today’s world, these temptations manifest themselves in the form of greed, often masquerading as security; in self-aggrandisement and the deification (and subsequent destruction) of “celebrity” personalities; and in abuse of power in all relationships, personal as much as national or international.
The Christian response to these kinds of temptation is to attempt to place self after God and alongside community. The season of Lent can be a period when we examine ourselves, our lives and our motives, and reflect upon what drives us, and how we deal with greed, self-importance and controlling nature. Wrestling with these demons allows us to be more effective in taking our place in improving the world. This is what the frequent references to, “The kingdom of God has come near,” mean in the Christian gospel. It is a time to examine the human characteristics of exploration and curiosity as applied to the journeys of our own lives.
Back in October, I wrote about the question, “Where have you come from?”  I left its partner, “Where are you going?” for future consideration. One way to answer the question is to seek new life, in the spirit of resurrection. But the season of Lent reminds us that for resurrection to occur, something has to die. Lent is a time to prepare to allow our hopes, fears, desires, anxieties, dreams and nightmares to go into the tomb with the crucified Jesus, that what needs to die may do so, and what needs to be reborn in fresh life may flourish, and draw us onward on our spiritual journeys of exploration.