By AnglicanChurch on 2016/04/28 in Christian Formation, Santa Margarita 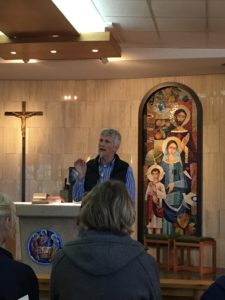 From Friday evening, 22 April, to Sunday morning, 24 April, more than 50 people from various Anglican chaplaincies in the northern part of Spain gathered for a series of workshops with John Bell, of the Iona Community.   This was an opportunity not only to hear an excellent and engaging speaker, but also for the chaplaincies to take a first step towards organising events together.

The location, the Josep Manyanet Spiritual Centre, near Barcelona, was chosen because of its proximity to Barcelona airport, and its central location amongst the various chaplaincies: Andorra, Costa Brava, Barcelona, Ibiza, Puerto Pollença in Mallorca and Menorca.  The Rev. Anne Jenkins, from the Costa Brava chaplaincy, organised the event, coordinating arrangements with the Manyanet Centre.  The Menorca chaplaincy arranged registrations, the collection of fees and payments.  The chaplaincy of Saint George in Barcelona conveyed those arriving and departing by air to and from the airport.  One of the tangential benefits of the weekend was the opportunity for members of different chaplaincies to meet, worship and interact with one another.

Over the course of the weekend, John led four workshops: Things they never told me about Jesus; Singing with the global church; Songs from the Iona Community; and the Spirituality of Jesus.  He integrates music as an adjunct into most of his workshops, not just those with an obvious musical theme.  More details of the workshops follow, below.  All of the participants seemed to leave with a sense of enjoyment, fulfilment and stimulation. 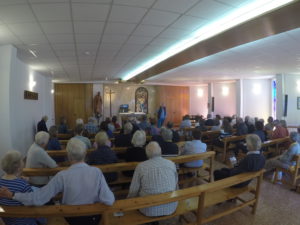 “Things they never told me about Jesus” focused on three aspects of Jesus that are often overlooked.

Jesus had a somewhat dubious pedigree: read through the genealogy in Matthew’s gospel, and note the list of flawed and fallible men, together with just four women.  Those women, Rahab, Tamar, Ruth and Bathsheba, are a very interesting mix, including a prostitute who hid spies and told lies; a widow who had to contrive to become pregnant by her father-in-law in order to avoid being destitute; a Moabite woman, who followed her mother-in-law faithfully to Israel after being widowed, and was encouraged in effect to seduce Boaz who became her husband; and Bathsheba, the object of David’s lust.  John’s point was that part of the earthy humanity of Jesus is to have a very human family tree, filled with the sort of odd idiosyncrasies to be found in the trees of many families.

Jesus had encounters with people who were not Jewish from his very early years.  The Magi were definitely gentiles.  Jesus’ family was exiled to Egypt.  In adulthood, he met Samaritans, a Syrian woman, Greeks and Romans, and on the way of the cross, a Libyan (Simon of Cyrene).  From each of these foreigners, Jesus accepted something: safety;  a witness of faith; an example of gratitude; a whole village of followers (the Samaritan woman at the well); help (Simon).  And he received graciously as they warmed the heart of God through giving.  It is a reminder that we cannot demonise people of different faiths, because Jesus lived quite comfortably with such people.

And Jesus had a sense of humour, which still manages to poke through our sanitised reading of the gospels.  John noted that it is not easy to paint people laughing, which is one reason why artists tend to depict Jesus as serious.

John led two workshops with musical content.  He decried the tendency to try to “professionalise” church singing, and to discourage those who believe they cannot sing well from singing at all.  Anyone can sing, if given encouragement!  Singing and music carry a great deal of powerful associations: they remind us of people, or places, or feelings, or events, or any combination of these.  Tunes can remind us of things that are quite removed from the words that accompany them.   In particular, songs we hear in childhood can affect the way in which we develop spiritually for the rest of our lives.  Music and memory are closely tied together, something that can be of great help when trying to help people with dementia, for example.  In particular, song is important because in singing we know that God hears us.

One of John’s passions is to debunk popular myths about Christian congregations: for example, the idea that an “ageing congregation” is a negative descriptor.  “Everyone is ageing!”  The implication is that older people are a deterrent for others to join a congregation.  But this runs counter to the message of scripture, which uplifts those who are older.  For example, Sarah, laughs because she’s 90 and going to be pregnant.  And the seasons of and around Christmas begin with Elizabeth and Zachariah, an elderly couple, and ends with Anna and Simeon; at its core is Joseph, who is older than Mary. 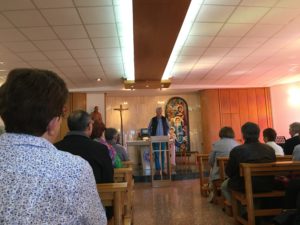 On Sunday, John led his final workshop, titled “The Spirituality of Jesus.”  In this he covered a great deal of ground: Psalms, Commandments and Women in the Bible.

Some points of note: