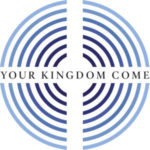 I once worked in Silicon Valley with one of those “hail fellow, well met,” sort of people whose greeting belied any attempt at listening to what anyone said to him.  Some of our attempts at prayer must seem like that to God.

A prayer is meant to be a conversation, a dialogue, not a one-sided harangue, even a positive one.  I remember being full of happy chatter at God at a place of solace and spiritual refreshment, only to be stopped in my tracks by the words, “Just listen.”  I did.

Later, I found myself needing to remind adolescents preparing for confirmation that we have two ears and one mouth, which tells us something about the divine importance of listening rather than speaking.

That being said, how do we have a dialogue with a divine creator who can be assumed to know what we are and what we need?

First, Jesus models the behaviour of praying openly to reinforce our prayers in community.  Just as Jesus invited his disciples into his relationship with God, so we invite one another to be immersed in a mutually supportive network of relationships with one another in God’s presence.

Secondly, the act of praying in specific words, especially aloud, organises our thoughts and feelings in ways that would not otherwise occur.  Then we have to open ourselves to listening.  And silent listening may lead us in unexpected ways.  It’s a risky thing, this prayer: the old adage about, “Be careful what you pray for – you just might get it,” contains uncomfortable truth.

What difference does it make?  What changes with prayer?  Well, possibly, for a start: us!

So, in response to the call of the Archbishops of Canterbury and York, we embark upon a week of prayer.  It is an opportunity to pay special attention to our prayers; to be in solidarity with one another in prayer; to be silent and listen to God in prayer; and to allow God to direct us through the Spirit.

The suggested starting point is, “Your will be done,” words that might cause us to be drawn in new and challenging directions.  Dangerous stuff!  Pray on.

For more on the week of prayer leading to Pentecost, go to: http://thykingdomcome.co.uk