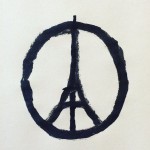 The problem with terrorist attacks is that they succeed. They succeed in causing shock and terror, or at least fear. Even expressions of defiance against terrorism, or expressions of determination not to be terrorised, are framed with the fear that is their intended objective. And if we were not shocked, we would have lost something of our humanity. But we have to resist the temptation to be drawn into a deep cycle of anger and further violence.

Before the attacks in Paris, I was planning to talk about Rene Girard, a professor of literature in France and California, and his mimetic theory. Perhaps he’s still relevant – perhaps more so. He suggests that human beings are driven by desires to imitate others: we want what we do because others have it. The social consequences of this, if not controlled, lead to conflict. Conflict leads to violence, and violence to the need for scapegoats, people to blame.

Girard was initially an atheist, who through his study found in the Bible the one religious text that denounced scapegoating and exposed it as a lie. This led to a conversion. The ultimate scapegoat was Jesus, who through his crucifixion and resurrection demonstrates once and for all that the practice is fatally flawed; the cross, if we heed it, takes away its power.

The terrorist seeks to exploit mimetic desire, and the desire for a scapegoat, to spread shock, fear and terror, and more violence as people seek human retribution, pre-empting God’s action. The shock, horror and fear remain.

But there is a deeper reality, one in which Jesus shows, through his own willingness to suffer for what is right, that human scapegoating only leads to more violence and death. Rene Girard, with his mimetic theory, reminds us that we have a choice about whether to live our lives trying to imitate others, or whether the only one worth imitating, and not in envy, but in pursuit of justice, is Jesus.