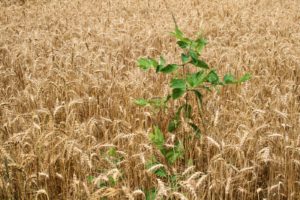 Jesus told a lot of agricultural parables, and perhaps sometimes the meaning gets a little lost today.  One can imagine critics of today’s parable asking, “What kind of person could be bothered to go to the trouble of planting weeds in someone else’s field?”  Jesus might counter with a modern tale, such as that of Percy Schmeiser, a Saskatchewan farmer, who found an unexpected variety of canola growing in his field.  He harvested it and used some to sow the following year, which generated the ire and legal beagles of Monsanto, whose patents Percy was claimed to have violated.

Jesus might point out that this shows that it is all too easy for crops to be contaminated, and that we should try to resist being sidetracked by odd details – with a healthy reminder to think about the meaning of the parable.  And what is that?

Well, it underpins much of the Christian gospel message.  It is about justice (and injustice), and God’s ultimate reckoning.  Jesus suggests in the parable that we should not preoccupy ourselves with the relative justice or injustice of this life, because God will take care of things in God’s own time.  The apostle Paul writing to the church in Rome, reinforces this, and tells us that faith allows us to hope for something even beyond our expectation or imagining.  So the righteous who have suffered will be compensated.

But what about the wicked who seem to prosper?  This is where Jacob enters the scene, who although not entirely wicked, is a rather “naughty boy,” at least in his youth – definitely tricky (as his name in Hebrew suggests).  Having twice cheated his brother, Esau, he finds himself on the run – and dreams of a ladder to heaven, recognising that he is in a holy place.  And God not only gives him a vision of the stairway to heaven, but renews with Jacob the covenant made with his grandfather, Abraham.  Apparently God has a soft spot for this dubious character.

This is both a sting in the tail of God’s accounting and a pearl of hope in life’s gritty oyster.  While most of us might not be quite as devious as the young Jacob, we end up rather closer to him than to Jesus on the scale of human sinfulness.  So it is good news for us that God has a soft spot for less-than-perfect beings.

If we do that, with God’s patient support, then eventually there just might be fewer weeds (i.e. less injustice) to be dealt with by those harvesting angels at the time of reckoning.

View all posts by AnglicanChurch →
Theme for Sunday, 16 July
Readings for worship in August 2017