In the past months, there have been various images showing people (often women) standing up to the threat of violence – images that show people brave enough not to stand down when confronted with power; images that show that power is not always where we expect. 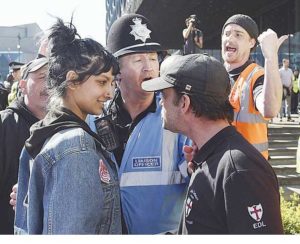 Generally, Jesus was to be found with those who were dispossessed of power, but Jews still retained some pride in the status as the favoured nation of God. This goes far back into their covenant relationship with God, which God elected to renew through covenants with the patriarchs, despite the dubious behaviour of Jacob and his sons, and even Joseph, who was not above playing the odd trick on his brothers from a position of power.

When Jesus went to the region of Tyre & Sidon, he was taking his gospel message to Jews dispersed beyond their homeland in Judea, with an established reputation as a teacher.  This is why a Canaanite woman, a Gentile, approached him with a desperate request to heal her daughter. In this situation, we see Jesus in an unusual setting as a person of relative power and authority in contrast to a non-Jewish woman of indigenous background who was desperate to free her child from suffering.

Jesus’ immediate response was not encouraging – in fact it was quite frosty.  Like most people, he had been raised in a culture that disdained foreigners, and he found himself confronted with its prejudice and racism. He told her that he couldn’t take the children’s bread and give it to the dogs, a vernacular term used by Jews at the time when speaking of Gentiles.

Let’s picture Jesus: not having an easy time with the authorities in Israel; taking the message to people further afield; having trouble with his own disciples; facing criticism because of their behaviour.  Through all this, he tries to honour the promise to deliver the message first to the people of Israel, despite a lukewarm or even hostile response in some quarters.  It must have been rather tiresome at times (literally).

Along came this persistent, annoying woman.  His first instinct was to dismiss her.  But he did not listen to the first instinct.

Unlike many of us, he was able to rise above all that – showing, in his true humanity, that he was capable of learning and growth. He listened to her; he listened to the voice of faith; and he healed the daughter, commending the woman in the process.

Fear of what is different is in fact a natural stage in early childhood; to deny it and hope that it will go away simply allows it to grow and fester.  However, we can be encouraged to grow beyond purely instinctive behaviour; and Jesus shows not only individual humans, but the ‘early years’ development of the church how to overcome prejudice and racism.

The Apostle Paul reinforces this message for the church: there are no exclusions.  We are called to join Paul and the Canaanite woman in the struggle to ensure that the dignity of every human being is not only respected but is nurtured and treasured.  To deny the full humanity of another human being is to deny our own humanity and to reject the invitation to discipleship of Christ – he who bestowed healing, not crumbs.  Can we follow his lead to overcome prejudice?  Of course, nowhere are we told that the call will be easy to follow – look what happened to the one who initiated it. 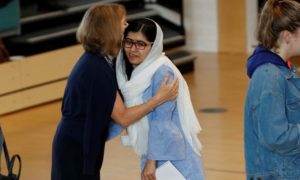 During the past week there was a footnote, in the context of women being treated as dogs and fed crumbs; standing face to face and toe to toe with violence, and refusing to be intimidated in speaking truth to power: Malala Yousafzai has been accepted into the University of Oxford.  The girl who was shot because she wanted to go to school.  Some dog.  Some crumb.

View all posts by AnglicanChurch →
Barcelona
Theme for Sunday, 27 August 2017