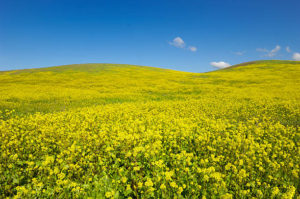 Those who travel to California, especially its northern and coastal regions, will find that a lot of mustard grows wild. Apparently this has origins in the Balearic islands; in the eighteenth century, Father Junipero Serra, a Roman Catholic priest and missionary, scattered mustard seed while seeking places to establish missions.  Father Serra’s legacy in California extends to more than its flora, of course.  He was principally concerned with spreading the metaphorical mustard seed which Jesus used as a parable for the kingdom of God.

This illustration is intriguing: the reason that mustard grows profusely in California is that it thrives so abundantly that many farmers regard it as a weed.  This is not new: at the time of Jesus, rabbis had added mustard to the list of unclean foods under the Jewish dietary laws.  So we find Jesus comparing the kingdom of God to an annoying weed!

Perhaps there was some humour in this: we can never be quite sure what tone of voice Jesus used, which would of course affect the meaning of his words.  If there is meant to be humour, then it originates with the Creator who persists in leading humanity into unlikely choices, such as the selection of David, a handsome lad, but rather the least of Jesse’s sons, as a replacement for Saul as king (while Saul was still very much alive and ruling).  The method of selection teaches as much as the result: often God helps us to learn from what is rejected.

What God sees in us that is of value does not always reflect superficial or apparently obvious priorities or values of our own.  This may seem to be preposterous, and it is: the word derives its meaning fromputting what is at the back first; remember, “the last shall be first.”  What David and the mustard seed have in common is that God’s kingdom, as described by Jesus, is comparable with rather annoying weeds, growing out of control from apparently tiny origins into something much greater.  The descendants of Junipero Serra’s mustard seeds are an outward and visible reminder of the seeds of faith that he helped to sow. May our own small seeds flourish similarly, because that is who we are meant to be.  The mustard shrub, or shrubs, of the world.

View all posts by AnglicanChurch →
Theme for Sunday, 10 June 2018
Dysmorphia – The Townley Venus