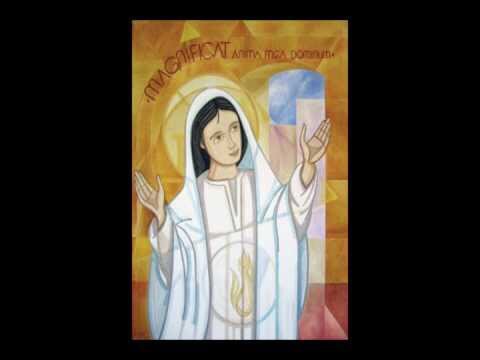 How is Mary depicted in the gospel passages dealing with the conception of Jesus, and how does that relate to the treatment of women in general? It has been suggested that Mary is shown as a passive, subservient woman, subject to a dominating, patriarchal role.

However, reading the song of Mary, the Magnificat, reveals a defiant young woman connecting the challenges of her own situation to the struggles of her people and its history.

The song draws upon words form an ancient ancestor, Hannah, who found pregnancy to be liberation from barrenness and worthlessness; words of tables turned, roles reversed, and restored value. The child that Hannah bore became Samuel, the great prophet; Mary’s words hold hope for the destiny of her own child – and faith in God’s promise.

So much for subservience. Mary is no doormat.

In any case, Mary’s obedience and submission to God are mirrored in Joseph – who shares a name and a connection to dreaming with his ancient namesake – and who listens to and obeys the will of God.

It has to be acknowledged that Mary’s obedience has been exploited for the purposes of cultural domination of women – but this is an abuse of the gospel message.  If there is any paternalistic, patriarchal stuff going on, it is not necessarily to be found in the words of the Bible. It is to be found in the attitudes of those who filter the message to synthesise it into something that suggests purely female submission and then abuse the words for discrimination and exploitation.

Both Mary and Joseph are examples simply of human obedience to God. They are both human beings who – at great risk to themselves and their reputation – consented to challenge conventions and expectations. Perhaps this is the recipe for a strong marriage: shared resolution to face a hostile world together!

Meanwhile, Mary and Joseph pose two challenges for us. First, how do we deal with those who seem to have made unconventional and difficult choices? Can we support and help them in their struggle?

Secondly, what do we do when God nudges us in the direction of choices that make us uncomfortable? Do we give in to the fear that is inevitably a reaction? Would we have the courage to stand up and face the consequences? No wonder angels’ first words tend to be, “Do not be afraid!”

The good news in all of this is that we are not, primarily, the ones called to save the world. Jesus is. We are invited to help, of course – hence the occasional invitation by God to submit to challenging choices. Fortunately, we can, like Mary and Joseph, obediently be guided and supported by God’s Spirit.

The Magnificat (from The Message)

Mary said, I’m bursting with God-news; I’m dancing the song of my Saviour God. God took one good look at me, and look what happened— I’m the most fortunate woman on earth! What God has done for me will never be forgotten, the God whose very name is holy, set apart from all others. God’s mercy flows in wave after wave on those who are in awe before him. God bared his arm and showed his strength, scattered the bluffing braggarts. God knocked tyrants off their high horses, pulled victims out of the mud. The starving poor sat down to a banquet; the callous rich were left out in the cold. God embraced the chosen child, Israel; he remembered and piled on the mercies, piled them high. It’s exactly what God promised, beginning with Abraham and right up to now.