For out of Zion shall go forth instruction, and the word of God from Jerusalem.  God shall judge between the nations, and shall arbitrate for many peoples; they shall beat their swords into ploughshares, and their spears into pruning hooks; nation shall not lift up sword against nation, neither shall they learn war any more.
Isaiah 2:2-4 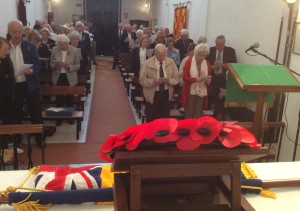 I had an interesting exchange with someone on Twitter last week.

The Church of England created a short video which consists of several people reading Laurence Binyon’s poem, ‘For the Fallen,’ from which the Exhortation that is used at Royal British Legion services and official occasions.

It is quite a long poem.  Laurence Binyon wrote it in September 1914, not long after war broke out, and after the first casualties.  It was written long before the events whose centenaries we have commemorated this year: the Battle of Verdun, lasting 10 months, or the Battle of the Somme, for example, that started on 1 July and lasted 5 months, with the greatest number of casualties in British military history, 60,000.

Those who wrote poetry later during the war, such as Wilfrid Owen, or Siegfried Sassoon, captured the essence of the drawn-out horror of the bloody battles for a few metres of Flanders mud.

Nevertheless, Laurence Binyon’s poem captured the sense of loss at the time.  These two verses were used in the video:

They went with songs to the battle, they were young,
Straight of limb, true of eye, steady and aglow.
They were staunch to the end against odds uncounted,
They fell with their faces to the foe.

They shall grow not old, as we that are left grow old:
Age shall not weary them, nor the years condemn.
At the going down of the sun and in the morning
We will remember them.

Which elicited a rather heartfelt but blunt response: “Describing our brothers from other European countries forced into wars by wicked men as ‘the foe’ is disgraceful.”

Well, I usually try to let such things pass by, but I was moved to respond: “It’s a poem written in the middle of war 100 years ago. Let’s allow a little poetic & contextual licence.”

Which in turn prompted this: “Let’s not give horrible lies the oxygen of publicity at a time of international political unrest.”

To be honest, I do understand the spirit of such sentiments, and where they originate.  However, I have led quite a few Remembrance Day commemorations, and I have seen seasoned veterans from the military with many years separating them from their service become tearful at these words, because they really do, or did, “remember them.”

However, the truth is this: that many of those who were and are sent to serve in military conflict at the risk of their lives are sent by people who have a lot less to lose.

The history tells the story of each war: of battles, of victories, of losses, of numbers that roll into such large numbers that we can’t comprehend them, of one side that wins, and another that loses.

Such history paints over a lot of cracks, each of which contains an individual story of struggle, of courage, of hope, of despair, of sacrifice, of loss of limb, or life.

It is the individual stories that are the ones that we strive to remember each Remembrance Sunday, because they make the conflict personal.  Those who offer their lives in some form of national service do so because they believe that in some way it will help to make the world a better place, or stop it becoming a worse place.  If we forget that we remember individuals, if we forget that we remember personal stories and aggregate them into a larger picture that loses sight of the details, then we reduce the act of Remembrance to a superficial social event.

I have to agree with my Twitter correspondent: we live at a time of international political unrest.  There are those who warn that Brexit and Trump are just two initial dominoes falling in a potential array of others waiting to be toppled.

Yet anyone who smugly and cynically rubs their hands at the demise of the current European order (for example), and shrugs it all off as the deserved demise of elitists and exploitative globalisation might take a few moments to take stock of what it might mean, especially in the context of those whom we remember today.  The thing is that it has been 70 years since there was serious armed conflict in Europe – well, almost, because there is Yugoslavia to consider – which, sad to say, is actually a long time of peace in the history of the continent.

Those who like to snipe at the EU and its oddities and inefficiencies might like to ask themselves this question: which would we prefer, an inefficient peace, or an efficient war?  A bureaucracy whose cost can be counted in Euros, or a conflict whose cost has to be counted in lives?  Which is easier to fix?

Those whose sacrifices we remember today, like my one grandfather whom I never knew, because he eventually succumbed to the effects of being gassed in the first world war after years of being an invalid, leaving my grandmother as effectively a single mother with five children, or like my other grandfather, depth-charged out of a submarine off the coast of Italy and taken prisoner – those whom we remember today deserve a better memorial than the cynical dismissal of a peace which is what was at the heart of their hope in serving.

The best memorial to those whose lives were lost and damaged in war would be that we do not have any more.  And that we work diligently to find solutions to international problems that minimise the possibility of armed conflict, not that inflame it.  That we really do strive to beat our swords into ploughshares, and our spears into pruning hooks.

Laurence Binyon did, unwittingly at the time, capture one of the sad truths of the war that he observed (being too old to serve himself, although he did go and work for the Red Cross): the soldiers who fell with their faces to the foe were indeed staunch to the end against odds uncounted: as my Twitter correspondent wrote elsewhere, Remembrance Day has its origins in giving thanks for the Armistice that ended a war in which – and I quote – “we remember bloody fields made by … fools who lied to good men – and still do.  Give peace in our time, O Lord.”

Leonard Cohen, who died this week, wrote these words:

There’s truth that lives, and truth that dies,
I don’t know which, Never mind.

We need to mind about the truth that lives in the memory of the errors and deceits that mark many wars, and the truth that dies with the individual memories of suffering and loss.  Because without those truths we dishonour those we remember.

There are three final verses of “For The Fallen.”

They mingle not with their laughing comrades again;
They sit no more at familiar tables of home;
They have no lot in our labour of the day-time;
They sleep beyond England’s foam.

But where our desires are and our hopes profound,
Felt as a well-spring that is hidden from sight,
To the innermost heart of their own land they are known
As the stars are known to the Night;