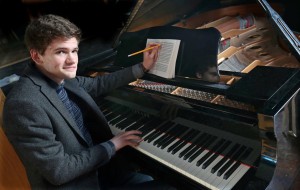 David Rose is a young composer and performer of contemporary classical music and has been awarded a scholarship to study composition at the Royal Academy of Music in London starting in September.

David is an accomplished pianist and he also plays the cello, both as solo instruments and in ensembles. David’s musical passion is composition, to which he dedicates the majority of his time, often imitating voices of other composers in search of his own unique musical voice. David has premiered pieces such as his Piano Sonata in public concerts and has had orchestral music performed by the County Youth Orchestra.  At the Purcell School of Music he was able to share new ideas about twenty first century music with like-minded young people, learning from David Horne. With Issie Barrat he gained an understanding of incorporating improvisations into compositions. After submitting a composition to the BBC he was invited to take part in a composition workshop in Cardiff where he wrote for members of the BBC National Orchestra of Wales and had a duet performed by Principal Trombonist Donal Bannister and Principal Bass Clarinetist Lenny Sayers. Similarly, he worked with the BBC Philharmonic Orchestra in Salford. Earlier in the year he wrote a choral work which was inspired by and contains verses from ‘The Lamentations of Jeremiah’. David is currently writing a Cello Sonata ,with assistance from Jacky Thomas, the cellist from the Brodsky Quartet.

Over the last 8 years David has performed in 15 musicals in local venues falling in love with the music from West Side Story. Inspired by Leonard Bernstein, he developed an interest in conducting.

This summer, David is giving a lecture on the music of Mozart and Stravinsky to a public audience, and performing one of his compositions in a locally organised concert in Thirsk. David is looking forward to performing to audiences in Menorca in July.