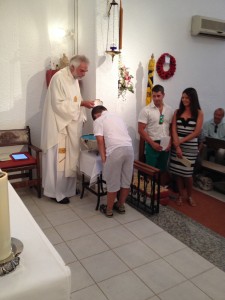 On 24 August, Jamie José Sanchez-Griffiths was baptised: the first baptism at Santa Margarita for a couple of years. It was a very joyful occasion, with a church full of both English and Spanish people: Jamie’s mother is British and his father is Spanish, living in Menorca. We did our best to conduct the important parts of the ceremony in both languages, and to provide our guests with a Spanish version of the liturgy. Jamie, who is eight, had persisted in asking his mother to be baptised, and we were delighted to welcome him as a new member of our church family.

Baptism (or christening – they are the same thing) is the sacrament through which people become members of the Christian church – not just a local parish, but the world-wide Church. Baptism can be administered to adults who wish to join the church, or to children. At baptism, membership of the church is observed by making a profession of faith and a commitment to live as a faithful Christian; it is marked through the use of water as an outward and visible symbol of the internal presence of God’s grace. The candidate is also marked by the sign of the cross, and symbolically anointed with holy oil. It is something that is intended to be a public celebration, with a profession of support from the rest of the community. Christianity is at heart a communal religion, even if it also has its dimensions of quiet, personal spirituality.

As a result, some parents choose to celebrate the gift of a child in a different way, without the commitment that baptism involves. There is the opportunity for a Thanksgiving service, during which parents and families can give thanks for the birth or adoption of a child, with prayer for family life. There are no promises to make about the Christian faith. The child can be blessed and prayed for, and family and friends will commit to support the parents in bringing up their child. This can take place in church, with the congregation, or with just family and friends gathered, or elsewhere such as home, or even in hospital.

Baptism is not the end of a process, and not necessarily the beginning, except in the case of very small children. It often marks the start of a new chapter in a quest of discovery that can also be a life-long journey of celebration. . Few people choose to come for baptism without some sort of spiritual motivation to do so: there is a spark within that lights a flame; in many cases, it is simply the acceptance of an empty place within that can only be filled by the divine.

But this is not the end point in a spiritual quest. We travel through life with our own emotional and spiritual burdens and uncertainties, and as life unfolds its unpredictable and mysterious twists and turns, we have to confront the questions and doubts that arise as we journey onwards. The Archbishop of Canterbury acknowledged this recently, when he mentioned in an interview that he often asks himself questions and confronts his doubts while exercising with his dog. The headline writers, quick to sensationalise, had a field day, of course: “Archbishop Doubts Existence Of God,” screamed at least one, with many variations on that theme. However, that is not actually what he said, and it is a pity that an honest expression of the doubt that marks the boundary of faith could not receive more measured and sensible attention. It is arguable that to be certain about matters of faith is not to have faith at all, really, because until we acknowledge the difficult questions of life, and the challenge that any system of belief, religion, spirituality, or faith faces in answering them, we have not really understood what we believe.

There is a blessing that I occasionally use that includes the phrase: “Voice your words of doubt and question; they are the making of faith.” All growth occurs at boundaries, and to understand where our boundaries lie is to begin to explore what we really believe. This is what baptism is meant to be, apart from a mark of membership: an invitation to a life-long process of growth, facing questions and doubts, and growing in faith as we honestly tackle the difficult issues that are so challenging to answer.

As it happens, at the age of eight, Jamie Sanchez-Griffiths decided to persist in asking his mother why he was not baptized, or christened, and so embarked upon this quest. He might have been a little younger than many who choose baptism for themselves, but his choice is one that we respect and which we celebrated on 24 August, a significant milestone on what should be a life-long journey of spiritual exploration.