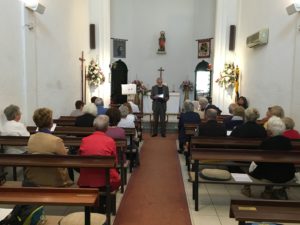 The Anglican Church in Menorca, based at Santa Margarita, held its annual meeting of parishioners and APCM on Sunday, 17 April.  The following are highlights of the meetings; the minutes will be issued in draft form in due course, and approved in 2017.

The chaplain opened the meeting with a prayer of thanksgiving on behalf of the chaplaincy for being entrusted with the stewardship of Christian ministry and worship in Menorca, and for the proceedings to be guided by God’s wisdom, compassion and wit, and in all things to seek first God’s honour and glory. “Guide us to perceive what is right, and grant us both the courage to pursue it and the grace to accomplish it.”

The annual meeting of parishioners affirmed the choice of Jane Sadler and David Green as wardens for the following twelve months. 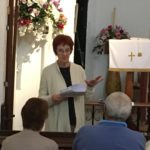 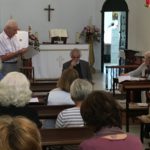 David Green presented the wardens’ report, noting that the fabric of the church, physical, financial and spiritual, had been kept in good repair during the year.  The finances of the church had allowed for funds to be set aside as a contingency for repairs to the building – there is one remaining source of a leak in the vestry – and for improvement to the air-conditioning and heating.  David thanked those who had contributed to the welfare of Santa Margarita, especially John Yallop, who continues to undertake repairs to the parts of the building and fittings that occasionally need attention.

The election of members to the PCC followed.  There were six nominations for six positions.  The following were duly affirmed as PCC members:  Richard Lewartowski, Elizabeth Astley, Dianne Carter, Penny Hargrave, Kathy Rossetti and Mike Martin.  Trevor and Margaret Jones continue to serve their three-year term as synod delegates.  The PCC is able to co-opt additional members, and it is expected that this will be exercised at the first full meeting of the council.

Following the reading and approval of the list of sidespersons, the chaplain delivered a report on the year, the content of which which may be downloaded as a PDF file: APCM-PAS-20150417.  The annual report to the Archdeaconry Synod, prepared by Trevor and Margaret Jones, forms the core of this (for which the chaplain is duly grateful!).  Those who have made a particular contribution to the life of the chaplaincy, and assisted and aided the work of the chaplain, were thanked.  The chaplain also gave some overall statistics in terms of the numbers of baptisms, wedding blessings and funerals.  The work of Dianne Carter in family and children’s ministry for the chaplaincy was highlighted, as it forms an important foundation for the future of the church in Menorca.

Sandy Malhotra, the volunteer treasurer, gave her report for the year.  The income/expenditure report can be downloaded as a PDF file: Income & Expenditure Account 31st Dec 2015 (7) for APCM 2016 as can the audited balance sheet: Audited balance sheet 2015 (1) for APCM 2016.  After allocating funds for church fabric repair and air conditioning improvement (as mentioned in the wardens’ report), and an increase in the chaplain’s stipend, the chaplaincy had a modest surplus of income over expenditure of €3222.57.  There were no questions regarding the accounts for the year.  The chaplain thanked Sandy for her continuing efforts as treasurer, which are greatly appreciated. 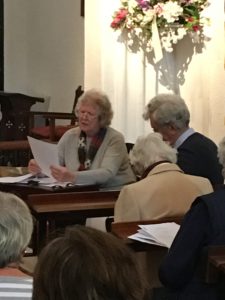 Margaret Jones not only serves as secretary and synod delegate, but is also the safeguarding officer for the chaplaincy.  This is a challenging responsibility at the best of times, but during the past year the diocesan policy and procedures have gone through a number of changes and iterations, making the task more complicated.  At this time, Margaret herself, both wardens and Dianne Carter have gone through the safeguarding procedure (the chaplain has to be approved through safeguarding as a condition of appointment).  Safeguarding now consumes a sizeable portion of the diocesan budget, reflecting the importance of making our churches visibly safe places for people to come and where those who are vulnerable, especially children, can be assured that everything possible has been done to protect them.

The chaplain then asked for a moment’s silence before offering a prayer for those for whom funerals and services of committal had been held during the past year.

The meeting concluded with prayers of commissioning and blessing for all those who will serve the chaplaincy during the coming year.