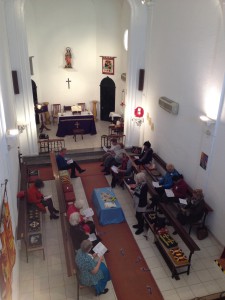 The Women’s World Day of Prayer was celebrated at Santa Margarita on Friday, 6 March, with an ecumenical gathering of women from Menorca (and three male observers!).
The service for 2015 was arranged and organised by the women of the Bahamas. The words and themes drawn from the islands of the Bahamas were beautifully crafted to reflect the nature of the Bahamas and resonated with those of us who share island living in Menorca. For example, God’s radical love is “as consistent as the sun,” God’s mercy is “as boundless as the sands” and God’s grace “surrounds us like the waters of the sea.”
The biblical theme drew upon the washing of feet by Jesus as described in John’s gospel, and poses the question across the ages: “Do you know what I have done to you?”  This was incorporated into the worship by asking the participants how this radical love can be demonstrated in our own lives, so that we might, as Jesus asks of us: “Do as I have done to you.”  As Muriel Chad, from the New Life Church of Menorca expressed it: “What can we do that takes a risk, that challenges us, to cross boundaries of comfort?” 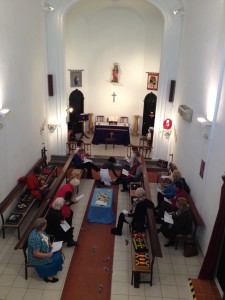 The women of the Bahamas, in creating the service, brought before the participants six projects that manifest their attempt to put the radical love of God into action in their own environment.  “Over The Hill” provides accommodation for women in the poorest part of Nassau.  A wall poster showed this project with the word “Poverty,” which was removed to reveal “Blessed.”  A Crisis Centre offers a haven for victims of “Domestic Violence,” words which were removed to unveil “Blameless.”  Those incarcerated in a Detention Centre were remembered with the word “Migrant,” which was removed to show “Accepted.”  PACE provides a sanctuary for teenage mothers and single parents; removal of the words “Teenage Mothers” revealed “Never Alone.”  All Saints Camp cares for those with HIV and AIDS, whose label was detached to uncover “Included.”  Finally, the Cancer Care Centre focused attention on “Breast Cancer,” which when cleared away revealed “Cured.”
This imaginative way of revealing the grace that is the fruit of tackling the challenges, difficulties and suffering of the world gave a graphic illustration of the potential of applying God’s radical love in our own lives.
The service for the day was carefully prepared by Dianne Carter and enjoyed by all those who participated.  Afterwards, we all retired for refreshments, and to reflect upon this opportunity to gather and worship in solidarity with thousands of similar gatherings around the world.