(This article is reproduced from the August issue of Roqueta, Menorca’s English language magazine.) 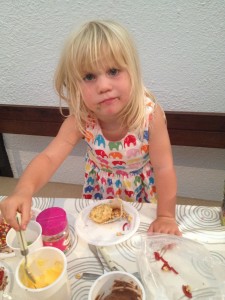 Small children have a sense of wonder in their engagement with the world that is a kind of wisdom all of its own.  Sienna regularly engages with the icing for the cup cakes.

Recently, in the same week, I was privileged to meet two four-year-old girls, one called Grace and one called Clara, both of whom were visiting grandparents. Grace is at the stage of asking a lot of “Why?” questions. In fact, she seems to have an endless supply of them. Clara came to the monthly service in Cala en Porter and gave me considerable assistance in explaining the parable of the sower and the seed (seed is distributed abundantly, and falls on various types of ground, some more fruitful than others). Children at the age of four have a delightful innocence, generally unscathed, as yet, by the pressure of peer-conformity, and caught up in the wonder and mystery of the world that they inhabit.

As it happens, in the same week that I met Grace and Clara, the prescribed reading from Matthew’s gospel for the Wednesday worship at Santa Margarita was this: “At that time Jesus said, ‘I thank you, Father, Lord of heaven and earth, because you have hidden these things from the wise and the intelligent and have revealed them to infants.’” It raised some questions. What is wisdom? What is intelligence? How do they relate to knowledge? Sometimes it seems as though the more knowledge that we gain, the greater the sense of pride we acquire, rather than a greater sense of humility in the face of the vast quantity of what we do not understand.

It helps to remember that although we live in an age when we venerate children, in first century Palestine the agrarian society in which Jesus lived placed no value upon children at all. I’m sure that parents loved their children: this is an instinctive and intrinsic human characteristic; but the basic value of children was primarily as potential contributors to a family’s well-being. To uplift the role of children as Jesus apparently did, even in a metaphorical way, ought to impose a serious sense of humility upon homo sapiens (“wise man”), since our knowledge is derived in the face of a cosmic wisdom that will always outweigh our own; and ought also to remind us to approach the acquisition and disposition of knowledge with a healthy dose of mystery and wonder.

The late Harold Williamson, in the 1970s, developed quite a reputation as “the man who talks to children.” He did so on television in “That’s Life,” but if I remember correctly, he was interviewing children on the radio before that. Anyway, he had a wonderful way of drawing funny but also wise answers from quite young children, largely because he asked open-ended questions, listened carefully to what the children said, and guided them very gently.

Reading Jesus’ words about what is revealed to infants and hidden from the wise and intelligent, I can’t help but think about Harold Williamson, and Grace and Clara, and the way in which God’s word is revealed to humankind. I wonder whether God has had this thought that once we start becoming aware of our own knowledge, we start also to become aware of our own intelligence – perhaps over-aware in many cases – and before long we start to believe that we possess wisdom. Much of the salvation-history of the relationship between God and humanity consists of dialogue reminiscent of that between Harold Williamson and the children he interviewed, trying to lead us to understand our place in the world through carefully crafted open-ended questions. Perhaps we should remember that four year olds have plenty of wisdom, but of the sort that approaches the world around them with a spirit of curiosity and wonder, not of self-assurance in preconceived ideas. The children who ask, “Why?” remind us that there are many aspects of life that we struggle to understand completely, and that our knowledge is almost always partial and incomplete.

I can imagine Jesus sitting down with small children and finding quite a lot of peace, consolation and amusement in dialogue with them, in stark contrast to disciples who failed to understand his knowledge, and “wise” people who thought that they understood it and therefore opposed it. And finding wisdom, of a sort that today’s world probably does not appreciate sufficiently. We may venerate childhood, but we seem to place more value upon precocity than upon innocence. Thanks be to Grace and Clara and all the other children of their age, who come to Menorca and challenge and illuminate us with their questions.