By AnglicanChurch on 2017/04/11 in Santa Margarita, Seasons, Themes 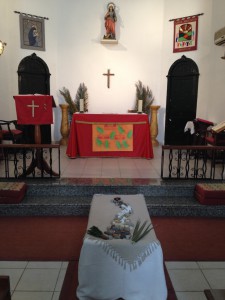 On Palm Sunday we remember Jesus processing into Jerusalem on a donkey.  At the same time, the imperial Roman governor, Pontius Pilate, was processing into the city with pomp and ceremony to supervise public security during the Passover celebrations.

This is the very essence of the week ahead of us, the climax of our spiritual pilgrimage through Lent.  As we read the account of the passion of Jesus, we do well to immerse ourselves within it.  We are called to emulate Christ as our model and guide.  In reality, during our lives we play several of the other parts in the sad drama:

To place ourselves in the procession of Jesus, we are just as much challenged today as his followers were then to confront the values of the culture around us.  We have to consider that the definition of “empire” in our times might include a much broader range than legions of Roman soldiers; today’s imperial forces use economics as much as weapons for subjugation.

The question of Messrs. Borg and Crossan remains: which procession are we in?  Which role in the passion do we play?