By AnglicanChurch on 2016/03/20 in Santa Margarita, Seasons, Themes 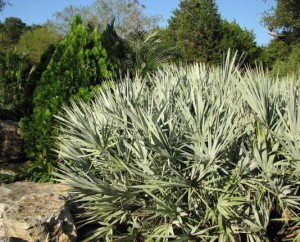 Palm Sunday, when we first process with palms to re-enact the entry of Jesus into Jerusalem, and then find ourselves abruptly immersed in the reading of the Passion narrative, has traditionally been in many churches an occasion to refrain from preaching – to let the gospel speak for itself.

Playing the part of the crowd in the Passion gospel forces us to consider our own role in recreating the crucifixion through our own attitudes and actions.  Nevertheless, perhaps it merits saying that the role of the crowd can be seen in various ways.

The gospel does not, for example, make it clear whether or not those who shouted “Hosanna!” were exactly the same as those who shouted “Crucify!” less than a week later.  They could have been – which forces us to look at the fickle nature of crowd behaviour, and our own complicity in submitting to the rule of the majority, whether or not it looks like a mob from the outset.

Or perhaps, as many have suggested, the religious leaders contrived to gather a crowd – “Rent-a-mob,” to repeat one descriptor – to force Pilate’s hand and secure the conviction of Jesus.  In that scenario, we may be less culpable by association with the baying mob, but we are still indicted.  How often have we remained silent when the innocent were being hounded by an aggressive and intimidating minority?  How often have we allowed our own passive behaviour to act as a form of permission?  When do we cheer for Christ when it suits us, or appears popular, but remain silent when it might be perceived to be unpopular?

Perhaps this is an advantage of the occasional lapses in detail of the gospel: in its imprecision there is an opportunity for it to be applied to our own lives in variant ways, and therefore to learn more about the breadth of Christ’s relevance to our experiences.

Meanwhile, humanity, of which we are a part, still manages to dither between “Hosanna!” and “Crucify.”