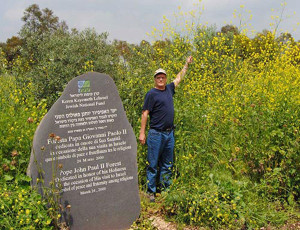 There are times when the Bible seems to be a bit of a joke, although there are some who are bothered by such an idea.

Should we see humour in the way God leads the prophet Samuel to have to go through an X-Factor of all Jesse’s sons before being led to choose David, the one not even considered for the line-up? Or is there a lesson for us, that we sometimes need to understand what not to choose, and reflect upon why, rather than jumping to a hasty decision, or conclusion, or choice?

This process of God favouring the reject, or the weak, or the second choice, is a recurring theme in the relationship between humanity and God, and it comes to a head with Jesus, the hippy from Galilee who is most certainly not the kind of first choice for leadership of the people of Israel – not according to the conventional wisdom of those who considered themselves to be his elders and betters.

Even the parables that Jesus used to describe God’s purpose and plan are a little odd – and perhaps even funny. To choose mustard – even proliferating mustard – as a model for God’s kingdom was strange; instead of imagery of tall, majestic trees, Jesus chooses the greatest of – what? – shrubs?! Mustard was an annoying weed, such a nuisance that rabbis had declared it to be ritually unclean – and this is the kingdom of God?

Perhaps Jesus was using humour to poke fun at – and to challenge – those who were stuck with a view that still upheld the equivalent of those of Jesse’s sons who were unsuitable for God’s purpose. Jesus was the David of his day: the reject, the one not even suitable to be considered for the selection process.

Yet God had the last word, a joke that might be funny had humanity not taken it to excess and dealt so terribly with the Christ: the poignant side of the joke.  God gives us enough rope, not to hang ourselves, but to hang God.  God gives us God’s heart to break.

Meanwhile, we are the inheritors of this vision of the kingdom: the mustard shrub of the world, meant to be a nuisance, a thorn in the flesh of conventional wisdom Is this preposterous? Quite possibly. Preposterous means to put what is behind in front. Remember: “The first shall be last?”

What a joke!  Except for the broken heart, of course.