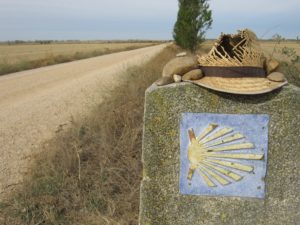 Exactly five years ago Kate and I were walking along a stretch of the Camino de Santiago which was originally a Roman road.  And it was the tenth anniversary of 9/11.  The road was quite an engineering feat: it had to cross boggy land and needed tons of rock to stabilise it.  It was an instrument of civilisation to its builders; but it was also an instrument of military rule and subjugation.  It is a road littered with memories of conflict and violence, yet we – with many others – walked along it as pilgrims.  A road of military conquest had become a route for those seeking peace.  It was also a road of faith: it has taken centuries for the way to become well marked and travelled, but early pilgrims had to blaze their own trail.

At the time, recalling the violent destruction of 9/11, I wondered whether there might be a hopeful metaphor for the world: transforming ways of violence into ways of peace.  In my journal, I was reflecting upon words of Ghandi: “An eye for an eye only ends up leaving the whole world blind.”

Five years later, there has hardly been much beating of swords into ploughshares.  There is still much suffering.

Where is God in all this?  God is certainly wherever humans reflect God’s loving, caring, generous nature.  God is also within our prayers.  Christians are encouraged to pray, in faith that it makes a difference.  Prayer unites us to God and to one another.  Jesus told his followers that faith as small as a grain of mustard seed can move mountains.  Usually, rather than physical ones, the mountains that need to be moved are of human nature: indifference, greed, complacency, prejudice, anger, violence: mountains that get in the way of the roads that we need to communicate with one another.

When the fabric of our communal living is torn, our spirituality is damaged.  When we attempt to deny our spirituality and “go it alone,” our relationships with one another are damaged.  When we denigrate or devalue the worth of another we diminish and dehumanise ourselves and tarnish the image of God in which we were made.  We have lost something.

The parables of Jesus about the lost sheep and the lost coin can be interpreted in terms of repenting and forgiving. They can also be understood in terms of recognising that we have been abundantly endowed, but need to recognise when we have lost part of ourselves.  Both are meaningful.

Meanwhile, there is a road that was built for military purposes, now occupied by pilgrims walking in peace, or in search of it. There could be much rejoicing if we went searching for a way for other roads of violence or exploitation to be turned into ways of justice and peace.  Heaven rejoices when we discover part of our human nature that has been lost; or when we are willing to repent and turn around.

We can accomplish either or both when we go searching for roads of to be transformed.  But someone has to be the first pilgrim.