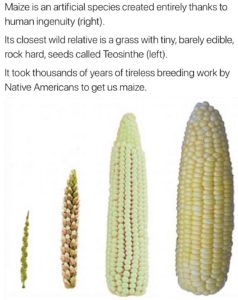 I discovered an interesting thing this week.  Much of the sweetcorn which is now consumed in great quantities in North America and elsewhere is a derivative of seed that was irradiated during the nuclear experiment at the Bikini Atoll in 1949.  Germination of that seed produced corn (maize) that had a high sugar content.

Maize itself is the result of selective propagation by many generations of the indigenous people of Central America.  Starting with teosinthe – which looks rather like grass and not much like maize – people whom we might now regard as primitive, without the tools of genetic science, developed and improved an important element of what is now part of our own food supply.

In a similar way to the selective propagation of teosinte into maize, the people of Israel, with God’s guidance, laboured for hundreds of years, through many generations, to develop their spirituality, faith and understanding of their covenant with God.  The arrival of Jesus introduces a major shift in the evolution of faith, rather like the nuclear explosion at Bikini, that radically alters the seeds of faith. Drawing upon a characteristic that is present throughout the Old Testament, the liberating power of repentance and forgiveness, Jesus offers a new basis for human living.

The early seeds of this can be found in David’s reaction to being called to account for his sinfulness with Bathsheba. The prophet, Nathan, traps David into judging himself with a parable in which the villain represents David.  Unlike many of us, who would leap for excuses, rationalisations, or even denials, David acknowledges his errors.  As a result, he is is able to move on (“You will not die.”).  The consequences of his actions will remain, but he is relieved of the burden of guilt, and is able to continue to be nourished by God’s wisdom, albeit through a spiritual journey that will henceforth be a rather bumpy ride.

Tangentially, we might note that the psalm appointed for today, 51, which is a penitential psalm used for Ash Wednesday and Lent, has an introductory phrase that connects it to David’s penitence: “To the leader. A Psalm of David, when the prophet Nathan came to him, after he had gone in to Bathsheba.” This is how David is remembered in the salvation history of the people of Israel, and therefore all Judaeao-Christian faith: as one who acknowledges both his dependence upon God and the error of his ways.

This is what Jesus offers: a kingdom of heaven in which true repentance is accompanied by God’s forgiveness and an opportunity for new life, without the burden of sinful guilt.  There is a burden that we carry when we find ways to avoid admitting our own guilt, or excuses for it.  Repentance and forgiveness go hand in hand in this.  Liberated from the restrictions of guilt, empowered by the gift of the Holy Spirit, the new generation of Jesus’ disciples carried seeds of renewed faith into their lives, seeds that continue to bear fruit in modern Christianity, empowering, though the work of the Holy Spirit, followers of Christ to make a difference in a world that needs it.

So, to put it succinctly: the people of Israel laboured for thousands of years to develop and refine the maize of their faith and their relationship with God.  Jesus, the Bikini Atoll explosion of spiritual genetic modification, leaves seeds that can sprout into the sweetcorn – something completely new – of Christian faith and a relationship with God based upon being honest with ourselves, and seeking forgiveness that is liberating for service to God.

Then, as the letter to the Ephesians says, we can undertake the work of ministry, for building up the body of Christ, until all of us come to unity of faith and of the knowledge of the Son of God, to maturity, to the measure of the full stature of Christ.  Maturity – that’s what happens with Jesus.  We’re supposed to grow up.  Then, when all those different gifts and parts of the body are working properly, this body of Christian faith can indeed grow and build itself up in love.  All of this takes place because Jesus was and is willing to feed his followers with the bread of heaven that represents true wisdom: liberation through repentance and renewal.