The past week has not been short on fearful news (back to the 1960s? the 1860s?): nuclear weapons; white supremacists and counter demonstrations; images of hatred.

It’s not just an American problem, although at the moment the USA seems to have grabbed the forefront of attention in this regard.  Anyone who ventures into the comments sections of web sites of news outlets, or Twitter, or Facebook, will know that there seem to be some disturbingly hate-filled people out there – all over the world.

C.S. Lewis, in The Screwtape Letters, wrote: “Hatred is often the compensation by which a frightened man reimburses himself for the miseries of Fear. The more he fears, the more he will hate.”  If Lewis is correct, then there must be a lot of fear around – which is probably true.  People fear unbridled change in their lives, through technology, mobility, climate and economics.  Their fearful reaction to seeing their world changed becomes channelled into hatred of the perceived instruments of fear. 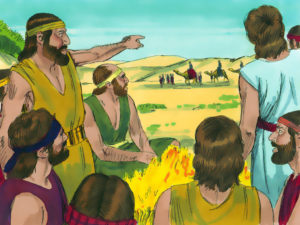 The theologian Karl Barth said that, “Fear is the anticipation of a supposedly certain defeat,” and we can see this in the story of Joseph and his brothers, for whom their father’s favouritism did not bode well, reinforced by Joseph’s dreams which were metaphors of his brothers’ subjugation.  We can see it in the white supremacists in the USA and their equivalent elsewhere: anticipation of having position, or prestige, or power lost and assumed by someone else.

In truth, there is much that we can come to fear in the course of a lifetime; we could spend our lives trying to secure ourselves against our insecurities, against anticipation of defeat.  But this is not what God wishes for us.

Joseph’s dreams did, in fact, come true, in a way – but not in any way that any of the participants, even Joseph himself, would have been able to anticipate. This is a recurring theme throughout the bible.  It is full of stories of people who came to succeed in God’s service, but not in ways that they would have expected (or even wanted beforehand in some cases). It ought to make us think twice about how we react when things don’t go the way we think they are supposed to go.

God has dreams and hopes for us which may indeed lead us into fearful territory.  But God can and will lead us through – having demonstrated though Jesus that we can traverse the valley of the shadow of death and emerge – not unscathed, but justified.  The dreams of God would have us get out of our metaphorical boats and hold fast to our faith in accepting the invitation to walk in Christ’s way.

We should desire to follow not so much our own dreams, but God’s, and to do so in the faith that is the antidote to fear.  We have these two in tension: fear, a natural instinct that keeps us safe; and faith, that puts our trust in God, and keeps our fear in check.  Faith offers us inclusion, as Paul pointed out to the Romans, which is an antidote to the fear of exclusion that affected the brothers of Jesus and the demonstrators in Virginia.

Ironically, paradoxically, there is one direction in which fear is justifiable: fear of the one in whom we have faith.  God’s power, as demonstrated through Jesus, is something that we ought not to take for granted, and which ought to leave us at least awe-struck.  But Jesus takes the power and shows that it comes from a benevolent God.  In doing so, he offers to lighten the burden of fear.

And so we can have hope in the one of whom we might say, remembering and re-applying words from a song sung by Glen Campbell, who died this week: “I need you more than want you; and I want you for all time.”