By AnglicanChurch on 2018/05/21 in Santa Margarita, Seasons, Themes 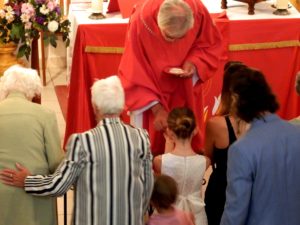 I recently saw an exchange of experiences about a British resident in Menorca who had been to see their doctor, whom they knew was able to speak English, but who told them to return with someone who could translate.  I saw someone comment: “That’s abusive behaviour.”

Well, of course it isn’t.  It might in fact be sensible, because giving medical diagnosis and advice in any language, even one’s first language is a matter of delicacy.  I thought for a while before responding.  Eventually I simply asked: “I wonder how many doctors in England would be able and willing to speak Spanish?”

Afterwards, I wondered whether I should have pointed out that for many Menorquins, English is a third language.  Almost everyone in Menorca is already bilingual: as anyone knows who has considered learning them, Castilian Spanish and Menorquin (a derivative of Catalan) are different languages in their own right.  When people speak to us in Castilian Spanish, they are consenting to use their second language so that we can understand.  Personally, I believe that deserves a bit of respect.

Language can be both a barrier and a doorway. Lack of understanding creates barriers; fluency opens doors.  Language can also be a tool, as Antonio de Nebrija surmised in the preparation of a Spanish grammar book that he presented to Queen Isabella in 1492, with the observation that, “language always accompanies empire.”  Isabella was thirsty for conquest, and the idea struck a chord.  It is true that colonialism involved control through a single tongue and a common vocabulary.

At Pentecost, the opposite of colonial rule through a single language is seen: a world of many tongues, in which God affirms diversity of language.  The Holy Spirit speaks through many tongues and every language is marked as holy.  Pentecost invites us into a new way of engaging with difference, including different languages.  No one has to give up their language or culture, but rather we are all invited to join together in one spiritual domain: a union of followers of the way of Christ. Through the Spirit, difference is made holy, as God commits to pour out the Spirit upon all flesh.

This is not an expectation of making everyone the same, but to accept that what makes us different from one another is good and holy.  Sadly, the history of the church, just as much as the secular world, is full of people who refuse to listen to alien tongues, who refuse to learn from other ways of being.  Evangelism and missionary outreach became mixed up with colonialism, conquest and cultural domination.  The Spanish empire, along with empires of Britain, France and others, regarded people of distant lands as barbarians: foreigners in need of God’s law in a western language and wrapped in western culture.  This has leeched into modern culture, so that it has become all too easy to look down on those who do not understand our language or customs, or anyone who looks different.

Pentecost offers us another way of looking at difference, where the Spirit brings differences together, around the same table, into communion.  Communion is an invitation to join together around a common table, to let Jesus stretch us into relationships with one another, with those who are similar and different, sharing the struggle to understand one another and God.

I was going to try to resist the temptation to mention Saturday’s nuptial celebrations.  But I lost that battle with myself.  It was a occasion not only of overcoming difference, but actually of celebrating it.  And like the day of Pentecost – I suppose, as with many weddings – it ended with all those strangers eating together.  Because – read on in Acts – the account of Pentecost ends with strangers eating together.  This is what communion means: to open ourselves to the Holy Spirit and hope for the miracle of knowing God in a meal, and in each other. 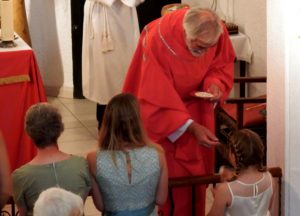 We welcomed three people to receive this meal of Holy Communion at Santa Margarita on Sunday.  It is a meal of great price, great cost and great value.  It is a meal that invites us to set aside the differences that might divide us, and instead to let our differences draw us together, respecting not so much our ability to speak one another’s languages, but to understand and respect one another’s hearts, minds and souls.

Welcoming these three as they joined us was an occasion to remember and be thankful that we share the privilege of being guests at this table where strangers come to eat together and no longer remain strangers, but join together as fellow pilgrims on Christ’s way.