This article has been adapted from Roqueta, July 2014.

In early June, Santa Margarita was contacted by the local television station, IB3, and we were asked for the opportunity to do a small feature on the church. Fascinated by this intriguing request, we offered our cooperation, although I am still not entirely sure what prompted the interest. I suspect that it sprang from awareness of “a type of tourism that is increasingly successful in Menorca” – couples who come to Menorca for wedding blessings – and curiosity about how this relates to the financial position of the church. The reporters requested permission to talk to a couple who had come to Menorca for a wedding blessing, and this we were able to arrange. A few days later, a reporter and cameraman came to the home of Mike and Rita Young, who, with Richard Lewartowski and Michael McPherson, hosted a lunch as a fund-raising event, generously providing the food and drink so that all the proceeds were given to the church. The reporters filmed us eating and drinking, interviewed a couple of people, and then went away to compile their report. 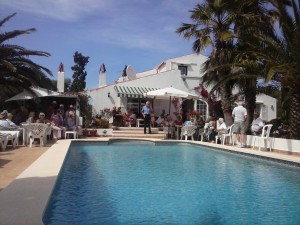 Perhaps there was a belief that the Anglican church exists as a sort of marriage chapel for British people who visit Menorca; and perhaps this is seen as something beneficial to the image of the island. I hope that in the course of discussion it became apparent that while Menorca is an attractive venue for wedding blessings, there is rather more than this to Santa Margarita and its people: those who were interviewed emphasized the pastoral nature of the church, the open social events, and its attempts to begin to serve the needy of the community in which it is situated.

A few days later, the Santa Margarita golf tournament was held in Son Parc. 56 golfers took part, including both Menorquin and British residents of Menorca, together with visitors from outside the island, including one, Brian McEldowney, from California. The tournament was won by the team of Javier Mascaro Sanchez and Gabriel Llabres Gisbert with a net score of 62. The runners-up were Pedro Mir Orfila and Juan Ferra Alles, with a net score of 64. The “super-seniors” event was won by Tony Brayford and Eric Ball, with a net score of 63. The event was sponsored by a number of local businesses, and with the help of a major raffle, made a significant contribution to the church coffers. 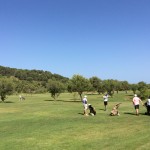 Each of these events raised funds for the church, as the reporters from IB3 noted, but rather more importantly, they provided an opportunity for social gathering, and for the church to reach out to members of our local communities outside the worshipping congregation. Church funds are important, but more important is a clear understanding of the mission and ministry of the church.

Many people find the discussion of business or financial aspects of church operation distasteful. Perhaps it goes along with that British characteristic of believing that it is inappropriate to talk about money in public. And we expect our churches to be places focused on spiritual development and pastoral care, not on income, expenditure and balance sheets. One member of the congregation said to me recently, “We want you to be able to focus on our spiritual care, not the management of the church.” And indeed, this would be an admirable thing. However, there are very few clergy anywhere in the Anglican Communion, certainly in the Church of England’s Diocese in Europe, who do not have to contend with the business of managing a church and its financial security: it’s a fact of life that money has to be spent on chaplains and buildings, and therefore money has to be raised.

But here is an interesting piece of data. Recent analysis shows that the cost of operating the Anglican chaplaincy in Menorca equates to €19 for each time someone attends worship at the church on a Sunday. It’s a simple calculation: take the annual operating budget of the chaplaincy, and divide it by the total Sunday attendance over the year. One way of thinking about this is that if everyone who came to church on a Sunday donated €19 each time they came, there would be no need for fundraising, because the church budget would be balanced. Of course, not everyone gives that amount – and not everyone can – while fortunately some give considerably more; almost since its inception, as recorded in the Acts of the Apostles, the church has had to rely upon those who have more to give helping to support those who have less. And while Jesus conducted an itinerant ministry with a handful of followers and no formal organization, once people began to feel moved by his message and join the movement that became known as the Christian church, questions of organization – and therefore money – began to arise. The early church was very communal in nature, with pooling of resources. We still, to a certain extent, rely upon those who have more giving more than those who have less, and for Santa Margarita we have to plan events that raise additional funds to offset an annual budget deficit.

Of course, all this talk of church finances can lend weight to the assertion that, “All the churches want is our money.” I am not sure whether this is more or less cynical than the opinion that I have heard expressed that churches for expatriates are largely social groups. However, it can be very easy for either or both of these characteristics to become real in the life of the congregation if there is not a clear understanding of the mission and ministry of the church.

Sometimes, congregations claim to want to grow, but without having a clear understanding of what growth is, or what it means. For example, as with any organization, numerical growth means larger numbers of people, and potentially diminished influence for those who arrived first. While I was in seminary, I wrote a paper about why parishes may become comfortable with the size that they are, and subtly resist opportunities to increase numbers. In essence, people become used to a status quo. Of course, when people leave, for whatever reason, and numbers decline, the organization has neglected the skills required to grow again. This is not just true of churches: it’s a basic characteristic of organizational development.

One of my former colleagues in Canada warned congregations to think seriously about the meaning of growth: “Why do you want to grow?” she asked, knowing that this inevitably relates to numbers. “Because we want fresh blood,” came the answer. She said, “That’s what I call the ‘vampire’ approach to evangelism and church growth.” Churches should want to grow not because they want more people for the sake of it, nor because they are tired and want someone else to start doing the work, and certainly not because of financial desires. Churches grow most effectively when their members feel that there is something of value about their church community and its ministry, want to share it with others, and feel strongly enough to start talking about it. After two thousand years, the most effective tool in bringing people to our churches is still what it was at the beginning: word of mouth. Growth occurs when there is something offered, not something to be taken. And growth may have to occur in terms of factors other than numbers – Christian education and formation, leadership skills, spiritual development, and so on – before the question of size can be tackled.

At Santa Margarita I believe that there is a clear understanding that while it is important for the chaplaincy to be based on a secure footing, this is not just a matter of finance. The chaplaincy is an important resource not just for regular Sunday worship, but also to provide support for numerous different aspects of life for those who live in Menorca, or who visit. Wedding blessings may be an obviously important event; and when someone dies, the presence of the chaplaincy is important to help with funeral planning and grief support. This is not just about having a chaplain, but about having the infrastructure to carry on the associated ministry. In simple terms, the chaplaincy is there when people need its services, no matter what form they may take. And our ministry, still in its formative stages, of providing help to the needy in the local community, is a reminder that we have an obligation to take care of those around us. The chaplaincy is a business, of sorts, but only insofar as it has to be responsibly managed, with good stewardship of its resources to make sure that it is there when needed. The ministry of the chaplaincy is what matters.

On Saturday, 21 June, a newly formed “Amateur Ancient Music Group,” Gaudium at Musica, performed at Santa Margarita, after asking whether the church could be used for a recital. The quintet of musicians, Benjamín Sintes (violin), Cristina Fullana (alto recorder and flute), Xavier Martín (tenor recorder), Juan F. Tudurí (cello) and Toni Carreras (guitars) were joined by Camila Tudurí (a vocalist with a hauntingly appropriate voice for this type of music) and garnered an audience of about 60 people, about three-quarters of whom were Menorquin. The group performed for nothing, but asked that a collection should be taken for the church. At the end of the evening, it looked as though people had been quite generous, but I simply dumped the money collected into an envelope to be counted later. Of far greater value for me, apart from an opportunity to hear some very interesting and moving early music, was the chance to host an integrated audience, and to return to the people of Es Castell and its environs some of the good will and hospitality that the church has received, and that Kate and I have received from a very welcoming place. This is a much better measure of success, and a much more fulfilling kind of growth, than counting money or numbers.

Those who wish to watch the IB3 news clip may find it on the IB3 web site by following this link: http://tinyurl.com/SantaMargarita-IB3 – but it should be noted that the commentary is in Catalan and Castilian Spanish.