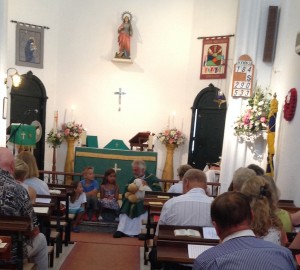 Shaun the sheep in church for the beginning of the story of Joseph.

He had heard stories, passed down through many generations of the sheep-to-sheep communications network, that a flock of sheep had been tended by a group of brothers who had mistreated their younger brother. He wanted to know more about this story, and the children seemed to have been learning about it, so he came to ask more.
The children were able to tell Shaun the first part of the story. A young man called Joseph had been the favourite of his father, whose name was Israel (originally Jacob), although Joseph had a number of older brothers. The father gave Joseph a special coat. The brothers were jealous of Joseph.
One day, while the older brothers were looking after their sheep, Joseph came to look for them, sent by his father. The brothers threw Joseph into a pit, and then when some slave-traders came along, they sold their brother to them. The slave-traders took Joseph to Egypt.
Meanwhile, the brothers took Joseph’s special coat, splashed it with the blood of a dead sheep (this part of the story was rather distressing for Shaun), and took it home to their father, so that he would believe that Joseph had been killed by a wild animal.
That is as far as the story went this week. Shaun is waiting for some more children to come next week to continue with the rest of it. 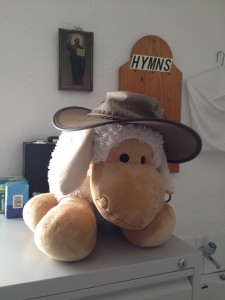 In his spare time, Shaun has been acting as custodian of lost property. Someone left their hat in the church, and Shaun took care of it until it was reclaimed by its owner.