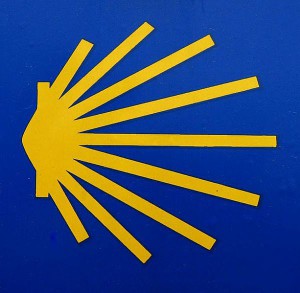 The collect for this day:

Merciful God, whose holy apostle Saint James, leaving his father and all that he had, was obedient to the calling of your Son Jesus Christ and followed him even to death: help us, forsaking the false attractions of the world, to be ready at all times to answer your call without delay; through Jesus Christ your Son our Lord, who is alive and reigns with you, in the unity of the Holy Spirit, one God, now and for ever.  Amen.

James in Spain is remembered in a rather broader manner than in other places: he is believed to have inspired the Spanish Christians to oust the Moors from the country, which is why he is often seen on a white horse, with a sword, as James, Jaume, Santiago, Matamoros – killer of the Moors. This is a rather militaristic embellishment of the story of James that might just be a little over the top.

What we are supposed to recall today is James the Apostle, one who asked to drink the cup of Christ, without understanding what he was really requesting.

The biblical James is ambitious, a competitor, who with his brother (Jesus called them “sons of thunder”) sought a prominent position in Christ’s “kingdom.”  Jesus asked them whether they really knew what they are asking: whether they were ready to drink from the cup that Jesus must drink.  They answered, “Yes,” without really knowing just what they were saying.  The tradition has the two apostles sharing in the fate of martyrdom, and so drinking from that cup.

Much is made of James following Christ to death, but we need to focus also on him following Christ to life.  James, as a disciple, would have seen the life that Jesus brought to those whom he encountered, through acceptance, teaching, healing and caring – all aspects of a human manifestation of divine love.  He was sufficiently impressed by this to become one sent, an apostle, who spreads the message of the gospel, drawing others not to himself, but to the Christ who transformed his life.

In the cathedral of Santiago de Compostela, the destination of the pilgrimage, the pilgrim is confronted with the relics of the saint.  But the relics of the saint don’t require us to worship them.  Instead, we are invited to worship the One to whom James, Santiago, points, as one who pursued and then promoted the gospel, with ambition: son of thunder, disciple-become-apostle.