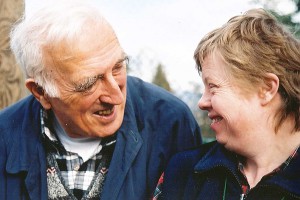 Jean Vanier, founder of the communities of L’Arche

A version of this article may be found in the June 2015 issue of Menorca’s English-language magazine, Roqueta.

At the end of May 2013, with our cat, I stepped off a Vueling flight from Barcelona into a new life in Menorca. Two years on this island seem to have passed incredibly quickly. Kate and I settled here and felt at home very easily. People have said to us that Menorca is a bit like Marmite: people either love it or hate it. We are fortunate to fall into the former category. There is something about this island that is alluring and endearing: perhaps it is, after all, the Lotus Land of Homer’s Odyssey. Oddly, the term “Lotus Land” is often applied to our former home in British Columbia – but for different reasons!

Despite the attraction of the island itself, there is another ingredient to the feeling of settlement and comfort about living in Menorca. It is the collective nature of the people here – the community in which we find ourselves. The local people have been friendly and hospitable, and the British have been kind and caring. We have truly been made to feel warmly welcomed into the community.

Community is an important aspect of faith. Wisdom is found when we talk and pray together, rather than when we act alone. The African church has given us the word ‘indaba’ for the process of collective, communal discussion and discernment. No matter how good our individual inspiration and insight may be, we need the wisdom of community to see clearly.

Our vision works in the same way: we can see what is in front of us and, with good peripheral vision, what is beside us, but we cannot see what is behind. The old pantomime cry of, “Look behind you!” works in life as well as on the stage. However, it only works if, unlike pantomime characters, we are willing to listen and to follow the advice. In an individualistic society, the chances of being willing both to listen and to comply are not always that great. I like to believe that whatever else churches may or may not do, they encourage us to treat one another with sufficient respect to pay attention to others and with sufficient humility to submit to wisdom from outside ourselves.

The problem with individualism is that it carries with it a delusion if self-sufficiency and autonomy. There’s a wonderful quote from Benjamin Disraeli: when told that the radical politician John Bright had a humble background and was an entirely self-made man, he answered, ‘I know he is – and he adores his maker too.’

Jean Vanier, who founded the communities that are called L’Arche, found himself confronted by the emptiness of such contemporary values as individualism and autonomy. He has called autonomy the ability to ‘live alone, watch television and drink beer.’ His point is that autonomy does not grasp the importance of belonging.

Jean Vanier was raised in Canada as the son of the Governor-General: a relatively privileged origin. He had an encounter with an emaciated Holocaust survivor in 1945 that opened his heart to the face of God in the oppressed. It transformed him. He came to see in the world “a huge gap of injustice and pain,” which he called “the gap between the so-called ‘normal’ world and people who’ve been pushed aside.” He was led to believe that injustice cannot simply be rectified by fixing a disability or outlawing discrimination. When he entered an institution for developmentally-disabled people and heard their simple cry, “Do you love me?” he realized: “That’s my cry too.”

On completing his studies as a Catholic philosopher he began to share his life in France with two men with developmental disabilities. He founded the communities of L’Arche, which have continued this work worldwide. These communities offer a place of compassion and acceptance, of welcome and friendship – bound together by sharing food, prayer and celebration. Jean Vanier’s name for such a community is ‘church.’ What he discovered in those communities was his own need of those people. They could help him to grow in “the wisdom of love.” All of us harbour some sort of disability or challenge, even if for some us it is less visible from the outside. We have become very good at diagnosing and classifying categories of ‘disability,’ but we are in danger of losing sight of a basic human need to live together. With a brother who is developmentally different, I have come to appreciate that there is value and healing in ensuring that he has a way to feel heard, appreciated and loved. L’Arche shows the interdependence of humanity and the need to support one another in community. For his work reconciling people with and without developmental disabilities, Jean Vanier has recently been awarded the Templeton Prize.

What Jean Vanier’s life work demonstrates, in a specific setting, applies to human life in general. Being in a community, and actively engaging in the life of that community, is part of healthy living. I have mentioned before the similarity between life in Menorca as an expatriate, and life in the village in which I spent formative years. Perhaps those of us who live as expatriates develop an appreciation for the need to support one another, and perhaps this is what makes relative newcomers, such as Kate and me, feel settled. Whatever it is, we are grateful, and hope to spend more years serving the people of Menorca. I have talked and written about continuing the work of building a community of faith here – which is a long-term project, and not something that I would ever have sufficient hubris to attempt alone.

To participate in communal life does require a certain degree of willingness to acknowledge the subordinate role of individualism. While we are not all created identically, we are called to adopt a certain degree of humility. The Bible expresses this in such passages as: “Everyone who exalts themselves will be humbled and everyone who humbles themselves will be exalted.” The problem for the self-made person lies not in riches, nor in status, but in the danger of forgetting who helped them to get there. It can be a good thing to be fruitful, to find purpose and fulfilment in work, and even wealth, but we need to remember who made us what we are.

Actually, we just need to remember who made us.