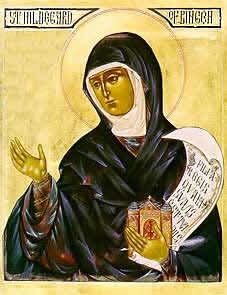 Hildegard was the tenth child to be born to a noble family in the Nahe valley, in the Rhineland. From early childhood Hildegard was the recipient of supernatural visions and experiences. At the age of eight she was put by her parents into the care of Jutta, a female recluse who lived close to a Benedictine Monastery at Diessenberg. Seven years after, at the age of 15, Hildegard took vows and became a nun in the monastic community that had gathered around Jutta. On Jutta’s death in 1136, Hildegard herself became the abbess.

As well as a visionary and mystic, Hildegard was a remarkable woman who excelled in many areas. She was not a nun removed from the world and enveloped by mystery. She was versatile and energetic, producing varied works and affecting others wherever she went. Hildegard corresponded with many people, including royalty. She saw herself as standing in the prophetic tradition and was not afraid to castigate or reprimand. She wrote musical compositions including hymns, chants and songs. Her theological works include commentaries on creeds and Gospels, and on the Rule of St Benedict. Hildegard’s medical handbooks and books about nature are remarkable for their content and conclusions. She also wrote a play.

Between 1141 and 1151 Hildegard began to receive visions and, with the approval of the Archbishop of Mainz, recorded some them. The collection of her visions is called her Scivias and contained 26 visions. Hildegard writes on the nature of man, and the Last Judgement. Scivias includes a collection of dramatic songs.

The community grew too large for their premises and moved to Rupertsberg, near Bingen. From this base Hildegard travelled throughout Rhineland and founded a daughter house at Eibingen.

Hildegard was concerned that the writings about her visions be approved. Pope Eugenius gave her the necessary permission and, as her writings spread, so did her fame. The mystical quality of her writings, and the nature of her music have led to Hildegard being appropriated by many people, not all of whom recognize the theological and spiritual base to her life. Hildegard was, above all else, a woman devoted to God, whose visions and writings sprang out of a desire for him.

Extract from Saints on Earth: A biographical companion to Common Worship by John H Darch and Stuart K Burns