Edith Cavell was executed on 12 October 1915.  The anniversary of her death is commemorated on this day by the Church of England.  This year marks the centenary of her death. 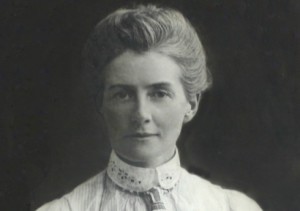 Edith Cavell, the daughter of a priest, trained as a nurse at the Royal London Hospital, and in 1907 became the director of a nursing school in Belgium. When Germany was poised to invade Belgium, Edith returned to be with the nurses she had trained, and she insisted that their calling was to care for all – friend and foe alike. From November 1914 Edith assisted British and Allied troops to escape from enemy occupied territory into the neutral territory of Holland. She was arrested for assisting Allied soldiers to escape.

A chaplain celebrated the Eucharist the night before she was shot and killed by a German firing squad on October 12th 1915. She was hurriedly buried in a grave outside Brussels, but her body was reburied at Norwich Cathedral, following a state funeral at Westminster Abbey in May 1919.

Her example inspired many, and she soon became a popular heroine and a model of selfless service. There are memorials to her opposite the National Portrait Gallery in London, and at Norwich Cathedral.

With thanks to Dianne Carter.