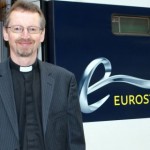 The following news release has been issued by the Diocese of Europe:

The next Bishop of Gibraltar in Europe will be the Reverend Canon Dr Robert Innes, currently Senior Chaplain and Chancellor of the Pro- Cathedral of Holy Trinity Brussels.

Pictures of the bishop designate and a video interview with him can be found, with a fuller version of this news release on the diocesan website http://europe.anglican.org/

Canon Innes was educated at Cambridge University and is an engineering graduate. He worked in electricity power stations and a major international business consultancy before training for ministry at Cranmer Hall, Durham in 1989. He served his title in the Diocese of Durham whilst also working as a lecturer at St John’s College, Durham (1995 to 1999) after which he spent six years as Vicar of St Mary Magdalene, Belmont.

He moved to the Diocese of Gibraltar in Europe to become Senior Chaplain and Chancellor of the Pro-Cathedral of Holy Trinity, Brussels in 2005. He was additionally appointed a Chaplain to Her Majesty the Queen in 2012.

Canon Robert Innes is 54 and is married to Helen. They have three daughters and a son. He will be commissioned and consecrated on the 20th July 2014 at Canterbury Cathedral.

The new bishop will be based in Brussels and work closely with the Diocesan Office in London. He says it is timely that news of his appointment comes on the twentieth anniversary of the opening of Eurostar adding; “It links Britain and mainland Europe in a very physical way. My job as a bishop will be to build links and bridges – between England and the continent and between the different parts of our huge European diocese.