By AnglicanChurch on 2014/12/06 in Children & youth, Santa Margarita, Seasons 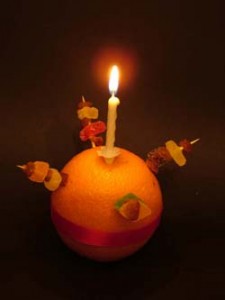 What is a Christingle?  It is an orange wrapped in a red ribbon, into which is inserted a candle, together with sticks on which are placed fruits and nuts, or sweets.

Christingles have been made popular in the England by The Children’s Society, since the first Christingle service, held in the Church of England in 1968. The custom has spread and is one of the most popular Christmas services in the UK, especially among children.

What is “Christingle?” The idea of Christingles originated in a Moravian Church in Germany in 1747. At a service at Christmas time, the minister, John de Watteville, gave children a lighted candle with a red ribbon around it. This represented Jesus being the light of the world and the final prayer of that first service was: “Lord Jesus, kindle a flame in these children’s hearts, that theirs like Thine become.”

The word Christingle could have come from several sources. It might be an ‘English’ version of ‘Christkindl’ (meaning little Christ child); the present bringer, who in some parts of Germany and other European countries, represents the baby Jesus. It could be the putting together of the words Christmas and ingle. Ingle is an old Scots word for fire and so that would make it mean the ‘Christ Light’. As Christingles originally came from Germany, the first theory is more likely.

This year, we are going to try something a little different: multiple Christingles. We will offer Christingle celebrations at Ciutadella and Cala en Porter as well as two in Est Castell. Please come and join us. If you have children or grandchildren to bring, so much the better. The dates and times are as follows:

(With thanks to Dianne Carter and the The Children’s Society for the basis of this description.)