By AnglicanChurch on 2018/11/01 in Christian Formation, Santa Margarita

The original version of this may be found (and heard, for those in the UK) at:
https://www.bbc.co.uk/sounds/play/p06m8k80

Last week, at the National Cathedrals Conference, the Archbishop of Canterbury spoke of his priorities for those attending services. “The first thing I want is for people not to be bored” he said, “I want them to have fun”. 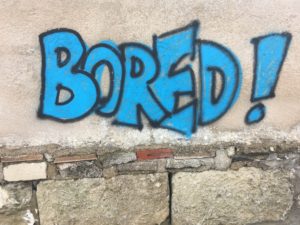 Graffiti on a wall in Es Castell, Menorca

Now, on one level I know exactly what he means. As someone with a pathetic attention span, I often find myself bored stiff with a lot of what goes on in church. And there is an uncreative sort of boredom that is entirely deadening – not what church should be all about. Nonetheless, one of the things I do value about churches is that they are amongst a dwindling number of places where we are still allowed to be the sort of bored that is all about not being constantly stimulated, where we can allow ourselves the time and the space that opens up reflection on things other than the buzzing of one’s mobile phone or the need to be continually distracted from the deeper existential worries of life. Libraries used to be places where you were allowed to be bored like this, creatively bored. But many of these too have become so-called “idea stores” with cafes and computer terminals taking the space of silence and dreary old books.

Surely, on some level, the need continually to be stimulated is a mechanism of avoidance, a way of ignoring all those disturbing thoughts that we constantly sit upon and push out of our consciousness. Boredom is often a precursor to facing all the stuff we don’t really want to face – like death, for instance. Or the question of what our eighty or so years on this planet are all about. Boredom is often a form of spiritual detox. Because sometimes the most important stuff we can think about cannot be accessed by way of entertainment.

The Norwegian philosopher Lars Svendsen has an interesting theory about boredom. In his book The Philosophy of Boredom, Svendsen argues that boredom comes to be seen as something to be feared when the human self replaces God as the ultimate source of meaning. In the religious world-view, he argues, boredom is a form of waiting on God, a bit like prayer. By contrast, particularly within the world-view of the Romantics, where meaning-generation is an individual responsibility, boredom comes to be seen as a very personal kind of failing – almost something to be ashamed of.

Some years ago, the journalist Andrew Anthony wrote a piece for the Observer listing a number of things that bore him in life: “cookery programmes, county cricket, 95% of theatre, and Thought for the Day” were on his list. Well, I make no apologies for boring you this morning, if I have. Boredom is often the manner by which we face the threat of meaninglessness. Like no other emotion, it poses the question of what we are here for. And if I can do just a little of that this morning, then I will have succeeded.

The Rev. Giles Fraser is an English Anglican priest, journalist and broadcaster. He is currently the priest-in-charge at St Mary’s, Newington, near the Elephant and Castle, south London.