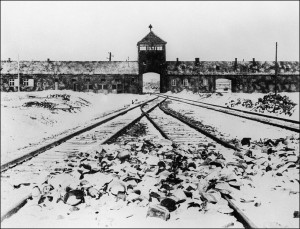 Auschwitz is on my mind, as the seventieth anniversary of its liberation is marked.

I have not been to Auschwitz, but at the age of 16 I visited Natzweiler-Struthof, a concentration camp in the Vosges Mountains.

People nowadays debate whether there is a point in maintaining the sites of the camps. I have to say that horrific as the liberation films are, there is something far more chilling about actually being in a place where human life was treated so cheaply and brutally.

Seventy years later we have seen more monstrosities that manifest “man’s inhumanity to man”: the Killing Fields of Cambodia, the ethnic genocides in Rwanda and the former Yugoslavia, amongst many. It would be easy for our sense of horror to be dulled.

That is a compelling reason why the sites of the camps with their surgical tables for experimenting on live human beings, the gas chambers masquerading as showers, and all the other trappings of these ghastly places are worth preserving. They serve as a graphic reminder of what we are capable of doing to one another, and as a warning.